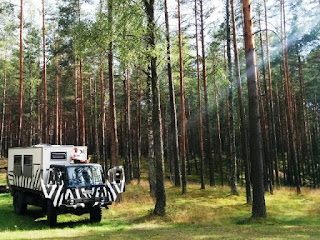 We left Poland and entered Lithuania about mid-morning. It was good to be able to take a stab at pronouncing place names again. Polish had been tough to try to interpret. How many ways to pronounce 'jzsh' does one language need?

We were immediately surprised by the change in population density. Though Poland isn't exactly teeming, we'd never encountered a sense of isolation: there was always a house or farm just around the corner, and every night seems to feature any number of distant barking dogs.

Continuing our newly-adopted tourist theme, within a couple of hours of entering, we did a famous attraction known as Grūtas Park. Essentially it's a collection of very heavy duty communist memorabilia and lays bare the still apparently raw and very real oppression felt by Lithuania under Russian and Nazi rule.

The park's centrepieces are various statues / busts (some huge) of dictators that were smashed from their proletariat-watching positions all across Lithuania at the end of the cold water and the declaration of independence of the Baltic States. Suffice to say the obvious brutality of dictators' rule was staggering.

Although the park performed it's function superbly it also had tacked on something of a 'zoo'. This was, being kind, pretty grotty with miserable-looking, downtrodden captives. The irony of such appalling oppressing in a park that exists to remind citizens of appalling oppression seemed quite lost on its creators...

After the captive-animal communist paradigm we headed off into a nearby national park and passed through some very small and rustic communities. Carved wooden folklore figures were all over the place and effectively replaced the decorated Catholic shrines we'd become used to seeing all over Poland.

At the coordinates shown now (pic) where we're enjoying Finland-type utter silence for the first time this trip. A few expected bird species are about but the best sighting has been a waxwing. The forest is teeming with insect life and I reluctantly have to agree with Emma: some of it a bit menacing.

I've spotted another new-to-me butterfly: a Duke of Burgundy fritillary. Other interesting insects seen today have been a 'flash' grasshopper (with bright blue wings) and a brilliantly coloured (metallic green and red) cuckoo wasp.