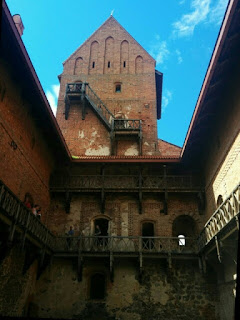 Last night's camp was the best yet: it remained utterly silent the whole night.

After breakfast we both ran through the forest. It was a fantastic experience but the questing clegs, mossies and hornets meant we had to be on our toes to avoid getting trashed. Whilst in the forest I saw tree pipits, crossbills and an (unfortunately dead) slow worm.

By lunch we made it to Trakai Island Castle where Emma went off to explore whilst I did some truck-related jobs, which - truth be told - mainly involved dozing. She reported it was heaving with tourists but enjoyable nonetheless (pic).

In a typical-small-world kind of way, it turns out that Robbie Williams is playing this very venue, possibly tonight: the stage was already built and ready.

A (very cheap) supermarket shop saw us set up for the next few days and we then headed for what are supposedly the cleanest lakes in the whole of the Baltic states where we found a camp at the coordinates shown. It was a little tricky getting here and we had to bash through some pretty thick vegetation. It's a pretty location, though. It's once again teeming with insects (especially grasshoppers) and, though otherwise peaceful, we find ourselves being watched quizzically by three cronking ravens.

Hoping for a swim in the morning.