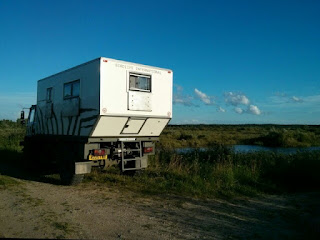 The day started well with sightings of an osprey and a clouded yellow butterfly. I took a walk out into the permitted part of the reserve again and it was teeming with butterflies, day-flying moths and dragonflies that I had no hope of identifying.

The day's drive was only a couple of hours and all of it on unsealed roads. For the entire journey we only saw about a dozen other road users. In spite of it only being a short drive we had our initial impressions reinforced. Latvia is pretty obviously some way behind Lithuania in terms of wealth and infrastructure. Roads are poorer (though not a disaster), there are loads of derelict buildings everywhere, loads of Russian-influenced crumbling concrete monstrosities, relict lookout towers, battered busses, dodgy power wires, ancient trains... the list goes on.

Getting back to it, the reason for the short day was the Latgale Lakes area of Latvia. Sites around these lakes are reportedly the best birding spots in the whole country and from lunchtime on, all we've done is hop from one lake / area of wetland to another to see what we could see.

It's certainly been a rewarding experience and this has definitely been the best single birding area we've encountered since leaving Lauwersmeer in the Netherlands.

Amongst sightings have been: black tern, great grey shrike, whooper swan, marsh harrier, black kite and, best of all, an aerial encounter between an osprey and a white-tailed eagle. We'd been watching the eagle soaring for a while when, out of nowhere, the osprey appeared and started mobbing it. The eagle was having none of it and was fully inverting and lashing it's talons at the mobbing bird. In the end, the eagle seemed to lose interest, swooped out of the sky, and landed somewhere in a pine forest leaving the osprey to quarter the wetlands at its leisure.

We're at the coordinates shown now, still enjoying views over the wetlands to a chorus of cicadas in the late-evening sunshine.