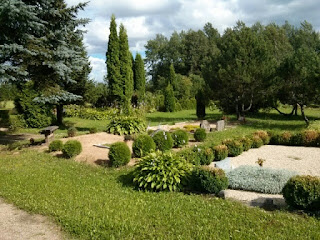 We started the day by training. Emma did a bike session and took a couple of Lithuanian Strava QOMs for her trouble. Whilst she was laying down the GBR gauntlet I ran and then swam in the lake next to the overnighting spot. Truth be told, 'training' is a bit disingenuous, swimming, biking and running in the area we camped was absolutely no chore whatsoever. The surroundings were just awesome.

After breaking camp we bumbled north and made Latvia by lunchtime. We still have things we want to see in Lithuania but they are to the west of the country and it makes most sense to do a large anti-clockwise circuit and to knock them off later in the trip. It's fair to say we've both been very impressed by Lithuania to this point and are looking forward to returning in a week or so.

Whilst on the road we caught a good sighting of a Montagu's harrier and a couple of fallow deer. I also saw a corn bunting (now sadly quite rare at home) and a couple of other buntings that I couldn't place. They looked a lot like cirl buntings but we're apparently well out of their range.

Initial impressions of Latvia are that it's not as generally affluent as Lithuania. Like Lithuania though, it's very sparcely populated and large tracts remain​ unspoiled.

One notable difference is cemeteries (pic). We've seen a couple now and they're different to any we've seen before in Europe. The ones we've seen were extremely well kept and much more informal and 'organic' than we're used to. They contained discreet little sub-plots comprising a handful of graves and each has a nice seating area and various rakes / trowels etc to hand, presumably to allow visitors to keep on top of the areas important to them. We saw no sign of neglect and the whole setup just seems to be more personal and celebrated  than what we're used to seeing back home.

We're at the coordinates shown now and next to a huge area of wilderness called Teiču dabas rezervāts, which is preserved (not 'conserved') solely for wildlife. The general public are not allowed into it's vastness and it's probably no coincidence that it supports thousands of species, including top predators like lynx, wolf, bear, and other  a large mammals like wild boar and elk. We've had a stroll on a short boardwalk that penetrates about 1% of the reserve's area and it's obvious it's very unmolested. We saw a few cranes and more fallow deer but sadly nothing big and scary.