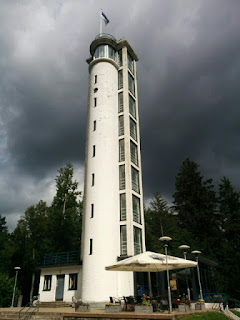 Whilst opening the security shields first thing this morning I'm pretty sure I spotted an otter bounding from the river towards a pond in the wetlands. If it wasn't an otter, I have no clue what it was.

After breaking camp, we bumbled north through the east of Latvia, and continued to be amazed at the roads. The ones we used today were almost all unsealed and - the continually amazing bit - traffic free. We didn't actually count, but estimate that during our whole south-to-north passage through the entire country we encountered fewer than 100 moving vehicles. This is no exaggeration: there's just nothing on the roads. Also, throughout the entire country, we didn't see one other camper / motorhome.

The east of Latvia at least is very sparcely populated and it's screamingly obvious there isn't much wealth about. We saw many signs of a very simple rural life like, for example, a woman sat on a stool milking a cow in the middle of a small field. The farm machinery we saw was, in the main, very archaic with what appeared to be decades-old eastern-bloc tractors forming the workhorses of the agricultural scene. No half-a-million-pound combine harvesters here!

Just after lunch we made Estonia and the change was remarkable. It instantly felt much more 'western', affluent, and with a far more sophisticated tourist scene. In rural Latvia there were very few formal tourist attractions: in Estonia we were instantly spoiled for choice.

Within three hours in Estonia we'd enjoyed an observation tower that marks the highest point in all of the Baltic states, the ruins of a castle, a Russian Orthodox church and a beautifully made viewing platform constructed on a high point that the local community uses to celebrate midsummer. Apparently, pagan rituals are still strongly supported throughout Lithuania, Latvia and Estonia: thank God.

The observation tower that marks the highest point in the Baltics (pic) is on a hill called Suur Munamägi. The hill is only 318m high but the observation tower adds another 35m or so. The views from the top were awesome. It was possible to see about 30 miles in every direction. The tower moved a bit in the (fairly light) wind and I confess was a white-knuckle experience for me.

We're at the location shown now where we're going to kip and are (genuinely) hoping to witness some Estonian rail traffic. Long story...