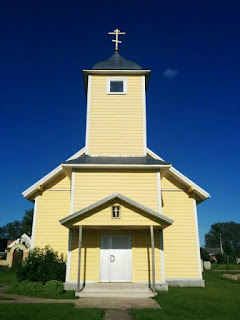 We've been on the guidebook trail again today.

First up was a walk in a very pretty valley that's surrounded by forest and characterised by its multi-coloured sandstone cliffs where the river Ahja has carved it's path over the centuries. The spot is near Taevaskoja and it's apparently commonly regarded as one of the prettiest places in the whole of Estonia. It was an impressive sight for sure but, ironically, vandals have added a level of interest. Over the years, as river levels have changed, different parts of the cliffs have been exposed and people have historically carved their names and dates into the soft sandstone faces. Some of the carvings had been very well done and many dated back to the early 1900s. We even saw one from the late 1800s.

Wildlife interest around the area was excellent with sightings of crested tit, green sandpiper and red squirrels. In the river we saw a shoal of big chub sunbathing near the surface. The river also supported an amazing array of dragonflies and damselflies, one species of which was the most startling electric blue. Top place.

Just down the road at Kiidjärve we called off at a tiny visitor centre on the site of the largest brick-built building in Estonia, an idealistically situated water mill. There was a super natural history display at the centre and it cleared up something that's confused us for a few days. In Latvia we saw two roadkill animals that looked like raccoons but it seemed so improbable we glossed over it. Earlier today, at the roadside near a farmstead, Emma caught a half-glimpse of a large mammal that she jokingly described as a roadside beaver.

It turns out that all these sightings were almost certainly raccoon dogs: an Asian species of mammal introduced into Soviet territories in an effort to provide a source of fur. They are now naturalised and doing well. Neither of us knew this mammal existed until today.

Mystery solved we made our way north to an area on the shores of Lake Peipsi that's known for an interesting creed of people known 'Old Believers'. Quite what they are all about we hope to determine tomorrow at a local museum but initial impressions are that they are distinct from 'modern' Estonians by some considerable margin. Their houses, villages and general appearance and demeanour are immediately obvious. Their symbol of the crucification is a cross with three horizontal bars (Russian Orthodox?), the lower of which is not in the same plane as the upper two. Also, all of their churches and cemeteries have three (often directly side-by-side) entrances. Of the few things we learned from a couple of hours in the area is that they are very insular, self sufficient and believe in the power of onions. Onions are somehow significant and loads of roadside stands offered onions by the kilo, as well as other fresh produce. We weakened and bought enough (very tasty) tomatoes to last us for about six years.

We're now at the coordinates shown (I found the spot during a bike session) and it's proving good. There's even a formal bird viewing platform overlooking the adjacent lake. The area is known for its importance for migrating birds and also provides breeding grounds for local species. Thanks to it, I've finally seen gargany. There was a pair and I almost missed them. The male was in full eclipse and, at first, I passed them off as two female teal.

Had to do a bit of truck maintenance today. The exhaust mounting bracket that attaches to a plate on the gearbox had shaken two nuts loose and the box was weeping oil. This has happened before on rough roads in Ukraine. The washboard surfaces we've been on for the past few days won't have helped.