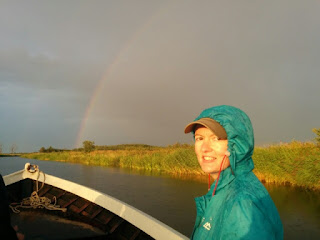 We had another go at the viewing tower before breaking camp and were again treated to hundreds of birds including at least half a dozen white-tailed eagles.

We were joined there by a bloke who in very broken English managed to introduce himself as a local farmer checking on his cows. We'd been marvelling at his cows already. They had literally hundreds of acres in which to roam around the reed beds and pastures of the reserve area and at the time he'd come to check on them they were wading udder-deep through the sea in what appeared to us to be a bid for freedom to Finland.

The farmer seemed to find their antics comical though, so we figured all was well. Whatever they were up to, they certainly seemed to be in good fettle and in a much better cow-life position than the udder-heavy antibiotic-sloshing herds that are ubiquitous in the UK.

After leaving the camp we knocked off a couple of local attractions in the form of Juminda lighthouse and a site of some 'stone graves'.

The stone graves were ancient things where human bones were lain to rest under piles of ornately arranged stones in some sort of ceremony (not fully understood) many years after death.

Juminda lighthouse was an oddity in as much as it's situated a little way inland and surrounded by forest. The area around it also had a few abandoned Soviet 'practice' missiles littered incongruously about. Altogether a bit of an odd place. There was some good birdlife about though: best sightings were four nutcrackers and a flock of crossbills.

Conscious of time we then covered some ground and by about 4.30pm had made it to the west coast of Estonia; specifically to the Matsalu national park, a vast floodplain area crisscrossed by rivers and featuring huge reed beds. We climbed a couple of the genuinely terrifying observation towers and spotted several Montagu's harriers and a hobby catching and eating dragonflies whilst on the wing.

We found a spot to camp (coordinates) and were just settling in when we were incongruously joined by a couple in an Estonian car who, in spite of drizzle and a thunderstorm rolling in, hung about oddly for ages not seeming to do very much at all. We imagined they were waiting to pitch a tent so were preparing to bale when we were approached by the chap who asked us in perfect English if we were also waiting for a boat.

Long story short, the couple were German and staying in lodgings a short distance away on their way ultimately to Finland. The chap is the treasurer of the European Ornithologists' Union and was on his way to a society conference in Turku.

They had arranged to meet a local boat owner for a river trip through the reserve to look for bittern and beaver. They invited us to join them; so we gratefully did (pic).

And so, for a couple of hours leading up to nightfall we had a unique view of the reserve and - excitingly - had success beaver-wise with really good views of three individuals.

The chap's knowledge of birds was incredibly impressive, and, he was very quick to spot them. Even more impressive was that not only did he know every species spotted, but also knew every one by its English name: a truly outstanding feat. His partner was no less capable language-wise with very good English and an ability to communicate with our (very capable) Estonian skipper in Russian. She was from the former GDR where a smattering of Russian was apparently a useful thing to know.

Awesome trip, inspirational people: you just never know who's parked next to you in the middle of nowhere.

In other news, the weather today - prior to the thunderstorm (complete with spectacular forked lightning) - had been insufferable. The heat and humidity had been suffocatingly oppressive.