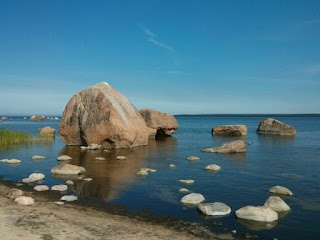 By lunch we'd made it to Lahemaa national park, the largest and most popular in the country. It's basically mixed forest that runs right up the coastline and four large peninsulas create sheltered and shallow bays that make for (popular) safe and sandy beaches. The whole area, but especially the beaches, are very touristy and we've seen lots of foreign tourists / motorhomes - mainly German and Finnish.

At the tip of the Käsmu peninsula there are some celebrated rock formations in the sea. We went to see them (pic) but it was a struggle. The whole village of Käsmu and beyond was thronged with people setting up stalls, stages, and putting on impromptu musical performances. It turned out we'd bumped into the annual folk festival. Beards, man-buns and flowing dresses were the order of the day and it was all a bit stifling so we beat a hasty retreat to the solitude of Eru bay.

Eru bay is a designated Important Bird Area and a newly erected hide overlooking the bay proved impressive. Even at this time of year the bay supports thousands of waders, gulls, wildfowl and raptors. Great white egrets and herons betrayed the sea depth, too. Even two to three hundred metres off shore they were still happily wading and hunting. Best sightings were extreme close ups of osprey and white-tailed eagle.

The sea is known to freeze solid in the bays during winter and it's pretty easy to see how it's possible.

We're at the hide now (coordinates) which has a car park so we're going to stay the night even though it's a bit nearer to a road than we'd normally settle for. During the evening about half a dozen people have turned up to scope from the hide, the first time since the Netherlands we've seen any other 'birders'

As an aside, we saw a good chunk of the quieter parts of the park by going out on our pushbikes and we also took on water today - the first since departing England. We had about 80 litres left so were OK for another few days but the proliferation of formal campsites made it easy (if a little bureaucratic) to take on a tankful of known-good drinking water. €6 and a lot of form filling (including the requirement to produce a passport) were the prices paid. It's the first time we've ever had to prove our identity to buy water. Conversely, man-buns are popular in the area and hard liquor is freely available in supermarkets...