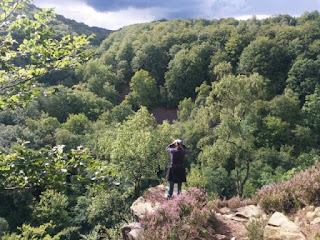 We broke camp and headed for a nearby attraction called Toros Stenhus, a beautifully restored Mediaeval castle overlooking it's own lake.

Thereafter we just bumbled in the rough direction of Söderåsen national park. It was a picturesque but uneventful drive punctuated by many roe deer and American car sightings. Best car was a mint 70s Camaro.

At one point in the drive, whilst looking for lunch stop, we chanced upon a huge refugee complex in the middle of what was signposted as a nature reserve: this is the third refugee containment facility we've seen in Sweden in only three days. The complex comprised a very large building that looked like a former municipal building or similar, together with many outlying buildings and associated land.

The place was heaving with people that appeared to be of north African descent and had loads of kids whizzing around: many of whom ran out to take a look at the truck.

We arrived at the Söderåsen national park late afternoon and after a bit of a quest found a spot that appeared it would be good to eventually spend the night. From it, we followed a guided walk from a leaflet we'd picked up to a cracking viewpoint from which we were informed it's possible to see wild boar and elk (pic).

No big mammals wanted to show themselves but we enjoyed the park anyway, it's made up of ancient deciduous woodland over steep hills and deep valleys - a welcome change to the endless pines...

About a hundred metres from where we'd left the truck was an official parking spot that gave access to a (nice) formal tent-camping area within the national park. At the car park was a really nice bloke from Belgium who'd just set up his tent and returned to his car to find the back window had been smashed out and a holdall full of clothes and his kid's teddy bear swiped. This had happened whilst we were out walking and it was pure chance the thieving scum hadn't broken into the truck, too.

Apparently, this was not an unusual occurrence here, a local farmer he'd chanced upon had already told him it was about the fifth time in the last couple of weeks such a thing had happened, the farmer himself said he'd also been the victim of petty theft. We left the area immediately.

Which left us cruising for a place to kip. The area outside the national park was heavily dominated by intensive agricultural land and farmsteads so we struggled a little for 20 minutes or so but then chanced upon an eerie, Mary-Celeste style golf course complex (coordinates) that looks to have been frozen in time and abandoned to its fate about two months ago. The clubhouse has tables laid out but no one to take their places. The greens still have flags flying but the grass around them is growing swiftly and is very coarse. The fairways are still discernable but look like 18 silage crops ready for harvest.

It's altogether pretty odd - and more than a little spooky... really.