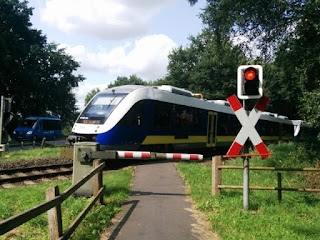 A re-fuel (€1.08/l) and simple drive back along the A1 saw us make the coordinates shown by mid-afternoon. We've used this place before, it's very pleasant and gives access to many sandy tracks and good chunks of heathland. The heather's in full bloom at the moment and is looking stunning. The area has a formal and well established trail with grasshoppers as it's theme - with good reason: there are lots!

If you are under ten you may not have seen a grasshopper in England because grown-ups used up all of the places they used to live to do things like grow crops and keep animals that can be used to make your yummy sausages.

In England, grown-ups know that it's important to make as much money as possible because money makes you happy.

If you want to make a lot of money by being a farmer or something called a developer, or if you want to pretend to your friends you are clever by getting other people to build things like super-duper-fast train lines or roads - things like grasshoppers just get in the way.

If you do, you might see things like the little special train barrier in the picture. You won't see barriers like this in England because it's on something call a cycle-way.

Cycle-ways are special little roads for foreigners who are poor and unhappy, and who have to use bicycles because they don't have enough money for a car.

Some poor and unhappy people in England use bicycles as well, but in England they don't get special little roads to ride on because something called the government thinks people who ride bicycles are stupid and not as important as people who drive cars.

When you are a grown-up and have lots of money and cars, you can use one of your cars to travel to countries that aren't as well run as England to look at things like little roads for bicycles, and grasshoppers.