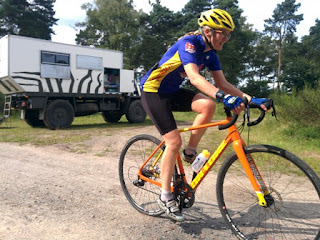 We spent some time making the most of the grasshopper trail this morning and were late (by our usual routine) to get moving at gone 11.00am.

On our various runs and bikes (pic) we didn't see anything rare or unusual but thoroughly enjoyed the area nonetheless.

After the late start it was just a case of bashing out the miles. For a section of about 30km the A1 was down to two lanes and anything over 7.5t or drawing a trailer was prohibited from overtaking. It was (again) really useful to be able - thanks to the oversized tyres - to cruise comfortably in the nose-to-tail line of trucks.

Our arrival back in the Netherlands was immediately obvious, the civic pride and general sense of organisation was again striking - even after entering from the German side - and is definitely something we Brits could productively learn from.

We're at the coordinates shown now, which are actually on private property. We met the warden here, talked about conservation for a while and he kindly let us stay on the bit of the National Park de hoge Veluwe that he manages.

We've heard but not seen one of the reserve's rarities: black woodpecker.