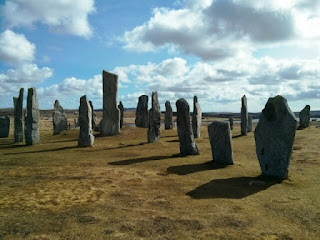 Initial impressions of the northern islands have been born out. They definitely feel less idiosyncratic and more like rural mainland Scotland. There's much more of a mainstream feel and tourist industry going on, which may be deemed a good or a bad thing. As well as touristy cars, we've seen a slack handful of coach-built and panel-van campers today, and also spotted a few foreign cars, too. We've seen two German, one Belgian, one Spanish, one French and, of course, one Dutch.

Dun Carloway broch was next, and this too is a great example. Because half still stands and the other half is long gone, it presents as a cutaway model and is, therefore, the first one we've seen where it's been clearly possible to work out the construction techniques and see where rooms and ceilings inside were. There's even a little interpretation hut / tat shop here.

Because we were back over on the west side of the islands, I fancied finding some more machair to see what we could see bird-wise. A random turn coastward saw us finding a track leading to Loch Mòr Bharabais (coordinates). It's a top spot set in machair with the sea to one side and the loch to the other. We'd only just arrived when we spotted a glaucous gull, it was a strikingly all-white example, too. As well as the by-now-expected sightings, we also saw a male black-throated diver in full breeding plumage, a red-throated diver, three white-tailed eagles, another all-white glaucous gull and a merlin flying at top speed along the coastline scattering waders and gulls in its wake. It even made the return pass and then very obligingly perched in full view on a nearby ruin.

The merlin means we've now seen all of the raptors that the islands are famed for.