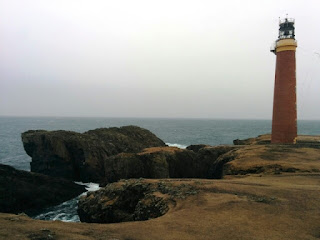 It'd be rude not to get to the northern-most point of the Western Isles so here we are at the Butt of Lewis lighthouse (pic and coordinates).

It's officially recognised as the windiest place in Britain and today is no disappointment. For the first time on the trip it's tipping down with rain and blowing a hooley. The conditions actually add to the sense of exposure, though. A fellow we met told us that the rocks here - many if which form impressive sea cliffs and stacks - are amongst the oldest known on earth. For sure they look really contorted with more layers than you can count  and all manner of bizarre folds.

It's been a treat to watch the nesting fulmar playing around on the wind, the control is just amazing. Also here in abundance are razorbills, shags, big gulls and gannets.

The highlight was a sole Iceland gull that put in a top showing just as we were leaving. Spot on!