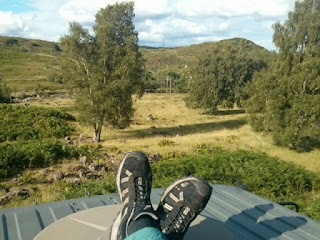 ... Ticks. Of all the innumerable invertebrates that regularly cause domestic disharmony, ticks are by far the most explosive.

I get it. They're dangerous vectors that are still largely underestimated and I've been persuaded that they are a genuinely significant risk to health given the places we go and the things we do.

Emma reminds me about ticks: a lot.

I'd only been for a five minute potter in some short-mown grass with the binoculars. Short-mown grass is not habitat generally associated with ticks.

Or at least it wasn't. I climbed back on to the truck oblivious of the fact I had dozens of the blighters crawling around me from about knee level down.

They weren't mature ticks, but she wasn't sympathetic to my mitigation that they were nymphs and I was made to leave the truck and be naked, outside, for an uncomfortably long while. It apparently served me right that no-see-ums and the infamously aggressive Scottish midges were at liberty to feast on uncomfortable parts of me until the first stage of the decontamination process was completed.

The total decontamination exercise lasted for two hours, during which time I wasn't allowed any tea. Tacit suggestions of over-reaction did not seem to help and only served to delay tea still further.

We were eventually deemed (provisionally) tick-free and my learning points were that short-mown grass is a significant tick hazard, naturism is just plain weird, and attempts to diffuse tick-related catastrophies with humour is not a good strategy for domestic harmony.

Today, as part of my attonement I ran for 5K before breakfast and then drove a long way back to the place we started this extension of our Outer Hebrides trip (coordinates) where a couple of crossbills unusually stopped flitting and calling from some indeterminate portion of sky and landed right in front of us for our viewing pleasure.