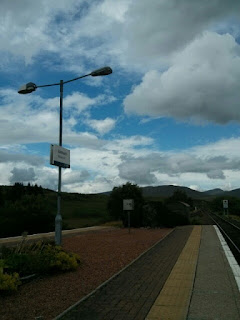 It was an early start again today as we had to catch the first CalMac boat from Armadale to Mallaig.

After that it was a drive down to Fort William through what I think is some of Scotland's finest scenery. At FW we fuelled up and grabbed a few essentials comprising entirely of doughnuts (50p for five at Morrisons, which isn't in any way meant to offer a possible explanation regarding the well-publicised Scottish dietary concern) and bumbled west.

Full of exactly 50-pence worth of doughnuts, and for no particular reason other than I'd had vague memories of Rannoch train station being the most remote in the UK, we decided to make the not-insubstantial detour across Rannoch moor to see how we felt about having made the journey to look at it.

Here we are, then (coordinates and pic). It's nicely presented and there's lots of interpretation around, which does a decent job of conveying just how hard Irish navvies had to work to make rich railway bosses even richer.

Happily, or lamentably, there's also now a tea room here, plus an adjacent restaurant. If you can block out the milling handful of tourists, and tea room... and restaurant, you really can get a sense of the enormity of bringing the railway through this stretch of genuinely inhospitable land.

Our Rannoch-moor bumblings meant that we also discovered a less-visited but even more impressive 'attraction' in the form of the working hydro-electric scheme that operates throughout this giant glen. Dotted about are nicely presented buildings with accompanying information panels (sometimes hard to find) that explain how the whole shebang works.

It's close to one such generator building that we're going to kip tonight. The weir we're alongside has given up pied and grey wagtails, plus a dipper (first in ages), whilst the hills above us sport a huge herd of red deer. We've also seen numerous Scotch argus butterflies (a first for us both).

In other news, Emma went for a run from here and I managed to get covered in ticks - more later...