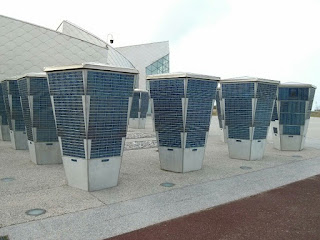 Emma was really suffering with a heavy cold so stayed in bed while I did Rouen parkrun this morning. It was a friendly if very sparsely attended affair but I hope they persist in trying to get them established over here. There were only 45 participants, which seems about average for the event. Curiously, there were countless people running up and down the banks of the Seine using the same pleasant walkways the parkrun course uses, but for some reason they choose not to get involved in the parkrun itself. I hope it changes, the organisers deserve some success.

After that we headed for the Caen area spotting a flock of white storks en route. After a pleasant lunch stop (where we - with some joy after the shortest day of the year - heard a mistle thrush in full song), we took in our first of the formal WW sites we'd planned to hit: the Canadian memorials (pic) and museum at Juno Beach. There's no point in trying to do justice to the magnitude of the events that happened here. Suffice to say the wind and kite surfers making use of the sea today off 'Juno' seemed incongruous.

Returning to the truck after a walk round the beach dealt a hammer blow. We discovered a major oil leak from somewhere round the front of the engine, which has blown (courtesy of the fan) all over the front and sides of the engine making a right mess.

In what remained of the daylight I couldn't fathom the problem.

Somewhat disconsolate, we limped to the coordinates shown in the hope it'd be a quiet place to overnight but it's immediately obvious it isn't going to be. The road alongside is far busier than anticipated.

I'm hoping to suss the oil leak tomorrow but if I can't, and with Emma feeling increasingly ill, we might just throw in the towel.