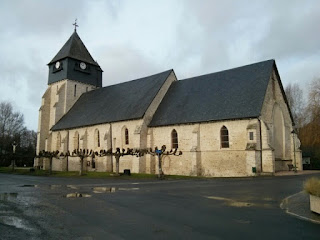 It was a delayed and bumpy crossing from Newhaven to Dieppe but we arrived, unscathed, late afternoon.

The civic pride of the French was immediately obvious. I don't know why it surprises us any more but it still always does. The difference between here and England is immediate and stark.

As well as civic pride we were also immediately met with civil unrest. The by now infamous 'yellow vests' were out and about and blocking a carriageway with pallets. There were also signs of not a few fires-of-protest on roundabouts and roads.

It wasn't a problem, though. The yellow vests clearly had no issue with your average Joe and all gave us big smiles and thumbs up making 'cool-truck' gestures.

It was heartening to drive through early evening sunshine and it helped with spirits that it was still light when we arrived at the coordinates shown at well after 5.15pm.

We're on an 'aire'. We only rarely use them but needed a bit of certainty given our late afternoon arrival and my hope of doing one of the very few parkruns currently running in France - just down the road in Rouen - first thing in the morning.

Surprisingly, the aire is almost full. All vans are French bar two from England. Right next to us is boules court with about a dozen older French chaps in full swing and looking quite serious. Just beyond is a very nicely kept public greenspace with people of all generations milling around with a reserved civility. We couldn't be further from home.

There's also a sizeable lake here teeming with geese, wildfowl and gulls. Best birds so far (in dwindling light) have been Egyptian geese.