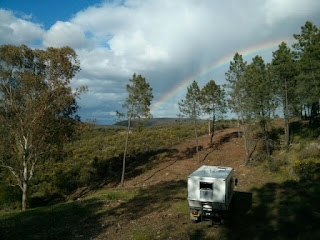 En route to the Monfragüe National Park we passed many swollen rivers and flooded farmland. At one particularly picturesque impromptu 'pond' we saw great white egret, grey heron, white stork, little egret and black-winged stilts making the most of the unexpected bounty. We also saw several more azure-winged magpies around and about.

We made the national park by mid morning and were instantly greeted by a golden eagle, three or four Spanish imperial eagles and scores of vultures. It's a relatively small national park but it really packs in the quality. The landscapes and geological features are top-drawer and the national park authority is clearly on top of visitor management. There's no right to roam and all viewing points and vehicle parking is strictly controlled. You aren't even allowed to sound vehicle horns. People of many nationalities are wandering about with massive cameras and expensive optics. We've seen Germans, French, Dutch, Italian and two other lots of Brits.

Fair to say the effort to preserve is paying off. The sheer number of raptors the area supports belies how much is alive here. There are literally scores of griffon vultures everywhere you look and as well as the raptors already mentioned we've also seen short-toed eagle, both black and red kytes, and a few that defied identification. The list of known bird-of-prey species here is eye-watering. Of the non-raptors the best sightings have been of Sardinian warbler, golden oriole and black stork.

At the coordinates shown now (pic) where we're going to scope the landscape till dusk. We've seen a few red deer about already but are hoping for a glimpse of other mammals or even the park's eagle owls.