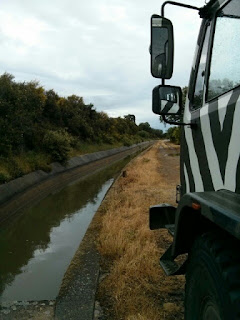 Last night's stopover turned out better than we'd deserved, with (again) neither sight nor sound of any people. As a bonus we were awoken at about 6.00am with a really unusual bird call that I'd have a punt was a wryneck.

The early morning was cold, sleeting and dark so we purposefully took our time setting off, knowing the steep and winding roads round and about might well be slippery. Sure enough, we'd literally only been travelling for 10 minutes when we were stopped by La Policia because of a nasty head-on smash between two cars. We had to wait ages whilst one casualty was removed and when we were eventually able to pass the scene, the force of impact was clear to see - one of the car's gearboxes had been smashed clean off the engine and was sitting mid-road. That was some whack...

The weather today has mainly been miserable with a combination of heavy rain, sleet, and snow on the higher passes. In spite of it, and between bouts of freezing showers, we've been able to do quite well for bumbling about, spotting birds; and have both fitted in a run, too. I did nearly have to be medevaced due to hypothermia, though. Not even joking: temperatures on publicly- displayed thermometers in various towns have read between 1 and 4 degree Celsius.

We've passed through many small towns and villages today and, perhaps because of their situation in national parks and associated tourist-economy; they've almost all been vibrant and very pleasant indeed, with nicely kept public spaces and an altogether more 'comfortable' feel than some of the run-down ghost towns we've passed through since arriving.

At the location shown now (pic), a splendid little spot next to an irrigation duct, in which we saw a fox inexplicably fooling around when we first arrived. Where we are gives good views of open country and lots of animal activity. We're also lucky enough to once again be accompanied by by both nightingale song and amphibian chorus.

We're set for the Monfragüe National Park first thing in the morning - reportedly one of the best birding spots in the region of Extremadura - which is itself supposed to be the best birding region in Spain. So far, we've no reason to dispute this.

Now, if only someone will tell whichever God is currently in charge these days that it's nearly May and it shouldn't be snowing in Spain now; well... that'd be grand.