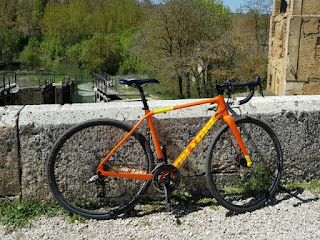 It's been a rough crossing to this point. Being prone to travel-sickness, I went to bed pretty soon after leaving Santander and escaped the worst of the crashing, rolling and yawing by dint of (interrupted) sleep... for a full 11 hours. Emma has no such motion-sickness issues, but has difficulty sleeping in unfamiliar beds. So, I slept fitfully with ever-present nausea, whilst she didn't sleep - but felt just fine: I'm not sure that there's a clear loser.

As I type, things have thankfully levelled out some, hence being able to look at a screen and type.

For completeness, the bees we saw yesterday were violet carpenter bees, they're striking and imposing things that are difficult not to notice.

We're not really looking forward to this evening. The ferry's due to dock at about 8.00pm so by the time we've cleared the port it's probably going to be dark. I only know one overnighting spot close to Portsmouth and I've only stayed in that in my small camper van - I doubt the truck will physically fit. Looking for spots in the dark, especially in larger campers, is just not good form. Don't try it, kids...

All in, this has been another really enjoyable trip with only a couple of days' worth of miserable weather, the incessantly crammed roads around Bordeaux, and the stark horror of everything about Madrid to slightly taint things (lo siento, Madrilleños).

We've done incredibly well for wildlife and scored some fantastic overnighting spots. Even the vast majority of the driving has been really rewarding - long may it remain the case that the smaller roads of France and Spain remain so uncrowded.

A note on the bikes we're now using on most trips. A genre now marketed as gravel or adventure bikes is big news on the cycling scene these days. There's absolutely nothing new about the concept, but bikes of this ilk used to have to be lashed up using bits of bike originally intended for different cycling disciplines (with associated compatibility issues). I freely admit I'm a lasher of old but have recently built a contemporary version. Emma's had a contemporary version for about three years (pic).

Basically, they're a fattish-tyred, relaxed-geometry, drop-bar bike that sit somewhere between a conventional sportive bike and hard tail mountain bike.

They're fast, comfortable (in the context of bikes, of course), light, and capable of going virtually anywhere. They're capable of flattery on roads used for grand tour mountain stages but will also happily take all but the most ardous off-road conditions in their stride. Add (now readily avaiable) luggage-carrying options and you can even world-tour with them. As a do-it-all pure-pedal-powered compliment to an overlander, they're hard to beat. Twaddle about pedal cycles on an overlanding truck blog, where will it end.

That's about it, then. Thanks for reading, all being well we'll be back on the road in the truck in July, direction of travel currently unknown...