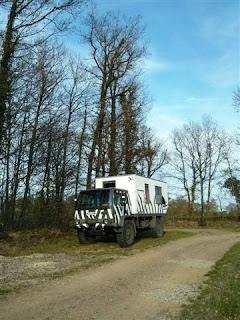 Last night's camp was a cracker, we neither saw nor heard any human activity the whole time we were there. Owls, yes; people, no.

The vast majority of today's drive had been on very quiet back roads and we've passed through a great deal of archetypal and very pretty rural village and landscapes. Once again, the obvious civic pride and altogether palpably civilised and tranquil nature of this country served well to lift our spirits as we bumbled along. Simplically, it's just better being alive here.

It's been hot, too. By midday temperatures were in the mid 20s and with the warm sunshine flooded in more of spring. We've seen and heard cuckoos, nightingales and the butterfly (and general insect) life has been thriving - a good representation of it buzzing around in the cab as we've driven along; much to Emma's previously-well-documented distraction.

Best butterfly sighting has been a Camberwell beauty flitting about in the treetops right next to tonight's overnighting spot (coordinates and pic). I've also found a new-to-me flower here in the form of St Bernard's lily.

Oh, also spotted today as we drove along have been a couple of hen harriers, one male, one female.

Our current location is no accident. Tomorrow morning we intend to check in on a patch of land about 20K south of where we're at that belongs to a friend, T244 owner, and all-round good guy: Simon C.