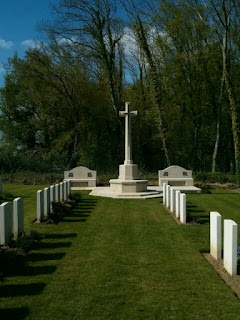 The overnight channel crossing was smooth and because there weren't too many people on the ferry, it was also a quiet and pleasant experience. Naturally, the all-you-can-eat buffet breakfast featured strongly in our morning routine and - we confess - heavily influenced this impromptu review. For the record, it turns out we can both eat quite a lot. Highly recommended.

The Belgian border authorities did their best to demonstrate their apparent disapproval of Brexit by taking a full hour to clear about 100 (almost exclusively British) vehicles, we responded by hoofing through to France as quickly as possible and buying fuel just over the border. Alarmingly though, for the first time we've ever known, diesel is now more expensive in France than in the UK. Go yellow vests!

A pleasant afternoon's drive through some very pretty, warm and sunny French countryside saw us arrive at the coordinates shown by tea time. Fittingly (given our last trip) we've found ourselves at some commonwealth war graves where a combination of (mainly) French and British soldiers from both World Wars are buried (pic).

It's a lovely spot from where Emma ran and I had a spin out on the bike. It's now post 8.00pm and the sun's still warm and birds are in full song. Our first blackcaps of the year are in full chat and we think we've spotted our first house martins, too.

The truck's performing well and the new crank seal is (so far), well, sealing the crank as it should...