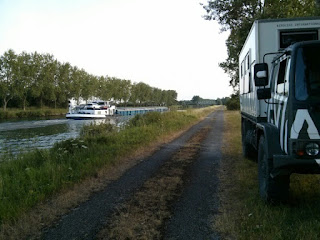 So, three and half hours later than expected we found ourselves in France - the third time in seven months!

We haven't used Calais for a couple of years, though and were initially slightly thrown... the route out of the port is now heavily modified. No longer is it possible just to pop into town; now there are miles of fortified fences lining an entirely new road, presumably in an attempt to foil any attempt at UK-bound clandestine passage.

We were quickly clear of the slightly-uneasy and into the rural and comparatively benign. A combination of space, a general sense of tranquillity, cicadas and the balmy air helping to bring us down, some.

At the coordinates shown now, our close-to-Calais bolt-hole of choice. I just love watching the huge barges - complete with bargees' cars aboard - ply the canal here; pic is of one that must have saved at least a dozen 40 foot arctics hurtling from a-to-b and back again...