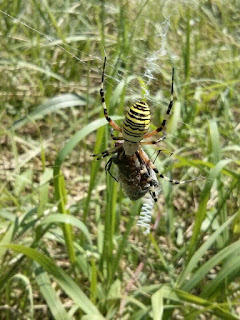 As we concluded in 2009 and again in 2010, Slovenia is just a fantastic country. It's achingly beautiful, immaculately maintained and conveys a sense of its people having achieved a highly ordered and proud society but, unlike Austria, by means of a light-handed and laid-back approach. Civic pride begets civic pride...

We travelled mainly on back roads all day and as a result it took an age to cover ground: steep hills and narrow, twisting roads make for slow progress. On the upside we were able to lollygag at the landscapes, immaculate villages, and properly enjoy some of the intricate traditional architecture including the always-fascinating open barns. Even many of the rural power lines here are still supported on traditional and rustic wooden poles; it's detail such as this that really makes a difference.

As it was boiling hot again we took little persuading to pull over in some shade next to a pond. Wow, it was like actually being in The Ladybird Book of Pondlife. With adjoining woodland and meadow, the whole area just teemed with life. There's no way I could identify everything we saw there but it included: edible frogs, newt tadpoles, water skaters, emperor dragonflies, blue-tailed damselflies, banded demoiselles, a chaser / hawker I couldn't ID, white admiral and numerous fritillary species butterflies, black woodpecker, golden oriole, and most compelling of all: a grass snake of about two foot that hunted in the pond almost all the time we spent there. There was even a beautifully preserved dragonfly exuvia; all text-book stuff. Oh, whilst listing species, we also encountered a wasp spider earlier today at our lunch stop that had done something despicable to its unwitting prey (pic).

After the pond we didn't much feel like driving so found somewhere close by to kip (coordinates), from where we had a ride out on the bikes through stunning landscapes.

As I type were bring treated to an amphibian chorus, grasshoppers stridulating and the constant 'whoop' call of a distant bird that I'm struggling to place.

Suffice to say Slovenia has never disappointed. It's a gem.