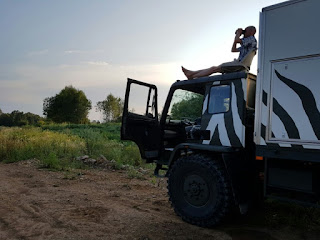 There was a spectacular thunderstorm during the night last night, a proper truck-shaker. Come morning, though, it was back to being stinking hot.

After breakfast we bumbled onwards, thoroughly enjoying the last bit of Slovenia before crossing into Croatia just before lunchtime. In spite of Croatia now being in the EU, there was still a hard border operating and it took a little while and a cursory passport check before we were allowed to continue.

We took a less than obvious route from the border south, and were quite surprised to find ourselves on a really obvious tourist trail. During our time in Slovenia it was incredibly rare to see a vehicle with a 'foreign' plate. On this Croatian trail, though, about half the vehicles we passed were non-Croatian: German, Dutch and Slovenian vehicles were common, but there were also loads of others from Belgium, Italy, the UK, and Austria; plus stragglers from Norway, Russia, Czech Republic and Hungary.

Reinforcing the whole notion of this being an area tourist-thronged were literally hundreds of B&Bs and guest houses.

It was all a bit of a surprise, really, as it's not terribly obvious why this bit of Croatia should be so popular. Maybe we've missed something.

Anyway, feeling slightly uneasy about what we were experiencing, we turned off the main drag and found the coordinates shown, which are much more 'us'. From 'our' newly-claimed bit of Croatia there are no foreigners (or even Croatians), we have splendid vistas, and have done really well for birds and insects. Much time has been spent atop the cab (pic).

Best insect sighting was a huge, flying iridescent green-bronze beetle subsequently identified as a forest caterpillar hunter - apparently it quite enjoys woodland and does what it says on the tin.

Best birds have been hoopoe, bee-eaters, golden oriole, turtle doves and red-backed shrike. The doves and shrike especially are  incredibly numerous: great to see given declines in the UK.

All being well, tomorrow we should make Bosnia and Herzegovina. The mobile rates there are ridiculous, so unless we bag free WiFi it's likely were going to be off the radar for a goodly while.