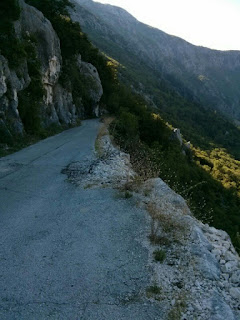 We didn't get any more hassle last night from locals, but then we only got passed by two vehicles the whole time we were there.

First job this morning was to spin out on the bike to recce the hill the satnav was advocating to extricate us from our hidey-hole. It turned out to be a good use of time. Apart from being an enjoyable thing to do, it revealed a couple of really dangerous stretches of road (pic). They'd've been pretty easy in a Land Rover, but irresponsible in a heavy old truck. Once again, bigger is not always better; in fact it's often much worse...

And so we went the long way round. The entire morning was spent making our way through countless seaside villages and towns, each of which meant long, hot, tedious traffic jams. Each resort was absolutely rammed with tourists, tourist-related tat, and aggressive drivers.

It seems there were mainly two types of car owner on these places: a) those who had managed to park somewhere and we're now dawdling about in ill-fitting swimwear and, b) those who didn't have a prayer of ever finding anywhere to park because of the sheer number of car owners of type a. It seemed that car owner type b considered a suitable response to their plight was to aggressively and pointlessly exit and re-enter the flow of traffic that was simply attempting to traverse said tat-filled resorts; thereby causing miles of jams in every direction.

Quite why people want to spend leisure time in these places or situations utterly escapes me.

Anyway, we eventually reached a point where it was possible to turn off the wretched 'Riviera roads' and climb somewhat hopefully into the mountains. This at least rid us of the disappointment of the tourism-based ruination of the country, but not of the fly-tippers or car-horn tooters.

Literally every single layby, wide verge and track entrance is like its very own landfill site. It's a travesty. The country is outstanding in its natural beauty with mountains, forest, lakes and coastline so why the natives see fit to bespoil it in this way is just beyond comprehension. Now, I know as a nation the UK is hardly able to claim much in the way of moral high ground when it comes to litter but the mess here is just on another level. It's a abject stink-hole and probably even surpasses Romania in this regard.

Car-tooters. It's hard to work out the mentality here, but even if we've just pulled off the road on to a bit of waste-strewn roadside for a cup of tea, many locals seem to be really aggrieved; expressed by the toot of their car horn. Maybe they are upset because they see it as their right to have unrestricted access to every bit of spare ground in order to dump domestic and industrial waste 24/7.

Back to non-people stuff; we've found what seems like an out-of-sight top place to overnight at the coordinates shown. It's the first and only concession to nature-watching we've seen in Montenegro. There's a bird hide and a few bedraggled information panels overlooking the northeasterly reaches of lake Skadar - a lake famed for its flora and fauna.

It's teeming with life and as well as the (by now) usual bee-eaters, orioles and other exotica like whiskered tern, we've bagged two new bird species: pygmy cormorant and Dalmatian pelican. Come sundown and the beginning of the relief from relentless sun and high-thirties, we also had a nightjar churring. Dragonflies, butterflies, spiders and the occasional genuinely sinister-looking winged insect (much to Emma's joy) have also featured strongly.