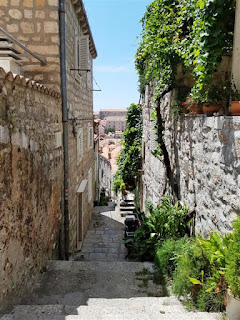 We broke camp quite early knowing we had a sketchy mountain pass to clear so wanted to reduce the possibility of encountering traffic. It was a good choice as the roads were helpfully as wide as a T244: but no wider. Only once did we have to reverse uphill to a twisty hairpin to allow a gormless car driver through. I could have brassed it out but it just wasn't worth the hassle.

By 9.00am we were back in Croatia, mainly to allow Emma to visit Dubrovnik, something she's always wanted to do. As we drove towards the town, a swimming / loafing-in-the-Adriatic opportunity arose so we took it. People bang on about the crystal clear waters of the Adriatic and with some justification. It was probably the most enjoyable sea swim / swim-training session I've ever had.

Emma 'did' Dubrovnik (pic) and raved about its beauty. I stayed on truck-guarding duty in the stinking-hot, overcrowded, traffic-rammed outskirts, caught up with a bit of research, and did some man-jobs.

Croatians don't particularly endear themselves. Many of them clearly hate tourists even though they equally clearly love the tourist dollar. We've encountered many examples of their irascibility and intolerance.

It wasn't a wrench to leave, then; and it was with some satisfaction we recalled we hadn't spent one single Croatian Mark whilst in the country.

And so, after queueing for two hours to cross the border, we're in Montenegro.

To be honest it doesn't feel much different. The people we've do far encountered seem equally intolerant. By way of example, when we first made something of a bid to set up an overnighting spot we encountered animosity in the form of passing motorists pipping their horns at us. Ironic, then, that they don't seem to mind one jot wrecking their beautiful country by filling every lay-by and roadside gutter full of fly-tipped waste.

Unless impressions change, I can see us spending not one euro here, either.

On the upside, the landscapes are indeed spectacular and, following an amuse bouche of crag Martin's and alpine swifts, we've had probably one of our most prestigious bird sightings ever.

First, we heard it as twilight crept in. Emma was the first to spot some movement and then, as it flew into clear (if poor-light) view it also called as it flew: confirming absolutely 100% we'd bagged an eagle owl. This is probably once in a lifetime stuff.