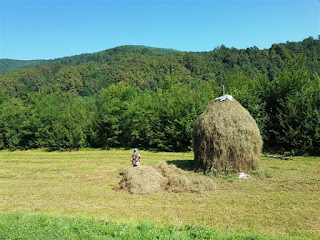 Today was mainly a ground-covering day but it wasn't without interest.

As we've travelled through BiH, Montenegro and Albania we've seen many roadside foodstalls where the centrepiece has been a pig on a spit over a wood / charcoal burner, often supplemented by different kinds of unsympathetically skewered poultry - and even sometimes fish. The idea seems to be that customers rock up, take a slice of what they fancy, and pay the skewerer accordingly.

This frequent (if slightly uneasy sight for us non-meat eaters) was trumped today on at least half a dozen occasions where we saw groups of men in various gardens gathered around a tarpaulin sheet butchering - sometimes pretty crudely - a freshly slaughtered cow. Sometimes women were present but not involved in the actual act, instead they seemed to be performing some kind of ceremony.

We surmise (perhaps incorrectly) that given we've only witnessed this activity this morning, and the obvious regimen of it, that it's probably related in some way to religious edict; and we'd guess the animals were slaughtered to accord with halal 'requirements'.

Here, Sunday morning is probably a time best spent running for the hills if you happen to be a cow; even if you happen to share the spiritual faith of the nice people who've always been so kind as to provide you with fodder.

Lunchtime was - as is the norm for us - very cow-free. It also saw us finding a series of lakes that were fantastic for birds and dragonflies. We spotted a scarlet dragonfly (quite a bobby-dazzler, even in the dragonfly world), black-winged stilts and purple heron. There was more to be seen but after about half an hour of cursory viewing we were approached and very politely informed we were on private property. We very politely apologised and began to prepare to leave.

The chaps informing us worked for a company that owned all the land and lakes, and interconnecting (unsigned) roads, and it transpired they were basically farming carp. At least now we know that carp-farming is a thing. They were very personable and were 'sort of' Manchester United fans so felt quite positively towards England: but not so positively they'd risk us swiping a carp or two.

The afternoon saw the (by now) familiar heat-soak situation, more typical Balkans rural scenes (pic), and the beginning of the end in terms of willingness and ability to drive with full concentration. I spotted a likely place to overnight on the satnav in the form of a dead-end road leading to a very isolated rural train station: so headed for it.

Mistake! The road towards the station started OK but very quickly became very narrow with carriageway-intrusive bushes and trees. Suffice to say that there was nowhere to turn and it just got worse and worse. For kilometre after kilometre we squeezed through vegetation that even the cab wouldn't really fit through, let alone the habitation box.

It was a time of much fingernails-down-blackboard-like screeching as each branch did it's worst. Eventually, we were spat out of the 'tunnel' and delivered to the location shown, a place wide enough to stop by the side of a cemetery without being in anyone's way. A rough calculation suggests I'll be polishing scratches out of grp until 2023.

The place we're at is not without charm. Insects are abundant (many of which we probably inadvertently translocated having swept them out of trees). Best sightings have been two species of smaller fritillaries (probably marbled and heath, but I struggle with this family), another flash-wing grasshopper and a particularly colourful rose-chafer beetle.