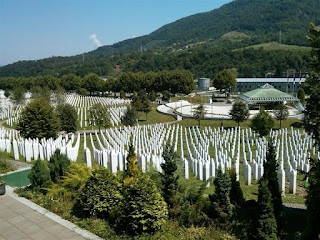 Number of ticks encountered on this trip to date = 0. Number of times I've received warnings for the imminent likelihood of a tick encounter = 8387. Just saying.

It was less than straightforward getting out of Serbia this morning. First of all we had another cliff-face descent to ease down. The use of cliff face as a description is hardly an exaggeration, either. Fortunately the road surface was good and wide, and traffic was very light.

Second problem was that the border crossing we arrived at - documents in hand and shirts buttoned up - was very closed.

A detour to another crossing about 30 kilometres away then saw us meet problem three. We had a full truck inspection and then the unofficial-looking official dealing with us tried to communicate an issue that he felt need addressing but we had no clue what he was saying and vice-versa. It was something truck-related rather than with us, but we couldn't fathom what was going on.

So we waited, and waited some more whilst the fellow with all our documents scuttled back and forth between various buildings, check-point cabins, and very probably the lavvy for his morning constitutional, too.

Without anything seeming to change, we were suddenly ushered forth, given our documents back, and with the raising of a flimsy barrier were officially out of Serbia. In contrast, entering Bosnia was no more than a quick query regarding our intentions and a polite wave through.

Srebrenica was where we told the border police we were heading and that's exactly what we did. We went to see the memorial cemetery (pic) and the various buildings associated with the 1995 genocide where more than 8000 civilians (Muslim men) were just plain executed in the name of ethnic cleansing.

It would be a travesty to try to do justice by way of blog-based commentary to the sheer brutality and horror. It's hard to comprehend this happened only a couple of decades ago on the continent of Europe.

By the time we'd seen enough it was knocking on towards 40°C (again) so we didn't have the will to drive too far before trying to find some shade and a place to overnight. It was a bit of a struggle today and tonight's spot (coordinates) is a bit of a compromise. We're out of sight and what have you and have some nice vistas but the proximity to houses means almost constantly barking dogs. It's been the same throughout the last few countries. Dogs here are scraggy looking things and there are more than a few that are feral. They aren't nasty but they are noisy; especially at night. No attempt seems to be made to hush them and it just seems to be accepted that dogs quite naturally bark; so it's just tough if you'd rather sleep overnight.

Anyhow, from where we are I've seen a western clubtail dragonfly and a fearsome dragonfly-like insect called an ant lion. I don't know which species it was but it had a wingspan of about 10 centimetres. I didn't know anything about them prior to seeing this one but they are so called because their larvae preys on just about anything with a face - including ants - in a really calculating way. Worthy of internetting if interested in natural history, or sneaky insect larvae.