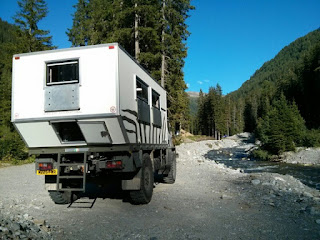 Italy continued to impress again this morning but at the last minute made us work a bit. Close to the Swiss border we came upon a completely unannounced 2.8 metre high archway at the entrance to a small town with no obvious way to avoid it. It meant a retrace-and-detour of about 15 kilometres; and most of these were quite stressful because of the improbably narrow spaces between road-encroaching buildings we had to work through. It was proper 3D driving stuff.

Adding insult to injury, the Swiss border brought something of a surprise in the form of: a) it being manned and, b) us being instructed to pull over on a weighbridge and take all the vehicle's documents to a nearby kiosk.

It turns out that since we last motorcaravanned in Switzerland the government has introduced a new taxation system whereby they charge a levy for any 'irregular' vehicles being brought across the border.

The bottom line is that to bring a motorcaravan of any size and weight in currently costs about £30 for up to10 days in the country in any 12 month period. It was slightly cheaper to buy a pass that would've lasted to midnight tonight, but that didn't really serve our needs. Again, it's a good job our V5C confirmed we were a motorcaravan because large goods vehicle levies looked - from what I could gather - positively painful.

Talk about have your cake and eat it. Motorcaravanners undoubtedly spend lots of cash, and Switzerland now charges such people for the privilege of spending money here. This stunt tips the balance and, in our estimation at least, Switzerland now outguns Austria as the least-motorcaravan-friendly country in Europe.

But... it is so jaw-droppingly beautiful. It really is. It's also spotlessly clean, everywhere, all the time. The landscapes are vast, the meadows are gorgeous, the mountains imposing and the settlements immaculate. Of course, like Austria, everything is verboten, there's a place for everything - and everything is in its place.

And there's the dichotomy again. We fit so well here, yet we don't fit at all.

Within a couple of hours of arriving we'd done two big-scenery roads in the form of the Ofenpass and Flüelpass, the latter being the slightly more testing, and slightly more elevated at 2383 metres, or just under 8000 feet. There was still some snow about!

As per a handful of other countries, it's best to be out of sight when overnighting here, but that's not always easy as mountainous terrain doesn't lend itself to lots of little-used tracks and trails. Every mountainous road and trail is very hard won so unless they're going to be well-used, they simply don't get made. It took some time, then, but we think we've bagged a decent hidey-hole next to a gorgeous glacial river (coordinates and pic).

From the cab-top seat we've seen dippers doing that dipper thing and 'flying' underwater in search of prey in a pool right next to the truck. Amongst the high ground surrounding us, I've also seen dozens of nutcrackers, a golden eagle and enjoyed the spectacle of a couple of peregrines seemingly playing; trying to out-fly / out-swoop one another.

The 'camp' and sightings have made unexpectedly being stung for £30 a (little) bit easier to swallow.