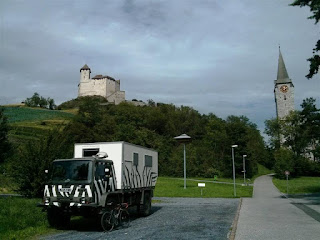 Liechtenstein. I met someone from here whilst in South America in 1992 (Elphie), and since then have always had half an idea to drop by to say hello. Well, admittedly it's taken a while, but today lent itself...

Getting here proved a devil as Switzerland doubled down on the frustration we encounter leaving Italy - quite literally. First we were thwarted by a 3.1 metre archway 10k from the border, then - having detoured to try another attack - were defeated by a 3.3 metre archway only 1k short. I admit I might have sworn a bit.

It took about an hour of faffing before we finally triumphed and entered what is probably the most affluent place in Europe. Once in, we spent a good three minutes looking for Elphie (who's surname and address I never knew, and who I doubt I would recognise amongst the population of  40,000 anyway; even if she still lived here, or was even still alive), then decided to do fun things instead.

So - deep breath... Emma had a look at a castle (pic), we both had a really enjoyable whiz out on the bikes, then drove the entire length of the country (about 25 kilometres) - sightseeing and people-watching as we went - before taking a leisurely lunch overlooking a lovely pond where I saw a couple of beautiful demoiselles (they are, too) and, on the nearby farmland, dozens of white storks, and... exhale.

We agreed with the generally held view that  Liechtenstein is indeed small (for a country), but also concluded we liked it. It's everything that Switzerland is but seemingly even more affluent and - in spite of the limited land mass - there's a sense of space and freedom. Fun is not quite so verboten and everyone seemed well-fed and cheerful.

Cool fact: it's also one of only two double-landlocked countries in the entire world. For a bonus point, name the other...