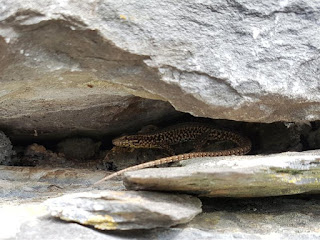 This morning Emma biked in, I ran in, then we took a scenic drive through, the small but perfectly formed mountains of the small but perfectly formed mountain range of Les Vosges. The following description may sound overdone by now but the area really is outstandingly pretty, supports excellent wildlife, and is well worth a week's holiday in its own right. Also, the presentation of the villages and towns within the range is pure France-at-its-best.

I've banged on about it before but France really does have something for everyone. The range and diversity of landscapes, wildlife, culture, habitats and recreational opportunities (whatever your bag), is vast.

After leaving the Vosges we basically covered ground. There comes a point where there's an unspoken acceptance that we're essentially just driving home and that happened at about 10.57am.

And so, we swung towards some trunk roads and Luxembourg in order to brim the tanks with diesel before the final push UK-wards. At €1.08 per litre it'd be rude not to. I like to think (naïvely I accept) that the big companies attracted to Luxembourg by the administration's 'interesting' taxation regimes are nonetheless paying enough in order to allow the administration to reduce the squeeze on the average sucker that's prepared to play by the rules, work all their life and parasite nothing from the state. I'd like to think that Amazon, et al, are funding most of the kitty here that - in line with most other countries of the world - politicians then mostly steal or maladminister.

Post tank-brimming and consumption of the obligatory garage-bought ice-cream-based treat* (a strawberry and white chocolate flavour Magnum today, highly recommend), we slid unobtrusively out if Luxembourg into the chips-and-mayonnaise capital of Europe, Belgium.

We were actually heading for a spot I know in France but tiredness started to creep in so I took a promising looking track shown on the satnav (the one with out of date maps and 'traditional' functionality) and it looks like it's going to be alright as a transit overnighter (coordinates). I may yet persist with this Garmin for another decade or two...

* Whenever it's Emma-the-lactose-tolerant's turn to pay for fuel, she returns from the cashier transaction with lollies - even in cases where garages don't actually sell them. No one understands how this happens.
Posted on: Thursday, August 22, 2019