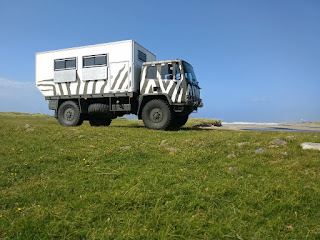 Blogging at 21:45 on Thursday 12th August from N 53.76357°, W 09.88055° / http://maps.google.com/maps?q=loc:53.76357%2C-09.88055
At just before 2.00am we were awoken by the start of an almighty gale that rocked the truck relentlessly. Neither of us slept well as a result. Come breakfast there were also a couple of really heavy downpours that led to literally sideways rain. This led to an almost instant deluge inside as the combination of conditions easily overcame the Domestic Seitz sliding windows we have and rain ran with gay abandon past the brush-style 'seals'. Good job we could just lift the window shutters to stop the rain hitting the windows in the first place.
Once we got underway we had a full day of very short drives and long, binocular-based stops. We found some cracking sites and have spotted some good stuff including: ringed plover, sanderling, dunlin marsh harrier and grey seal to add to the holiday-tally. We've also seen another common seal and two more mountain hares. At times the sun even shone (pic) but the gales never eased. Bracing.
Once again stunning land and sea-scapes have been the norm, as have outrageously skinny roads with huge drop-offs and encroaching vegetation. Driving the truck here, as noted on previous visits, is a full-on caper.
The road to the spot we're currently at was about as challenging as they come. It was steep, twisty and not even as wide as the lorry. Brambles and bracken overhung into the carriageway leaving a gap of about 2 metres to squeeze a 2.4 metre lorry through: there were a lot of scraping noises for a good three miles or so.
But, it was kind of worth it as the (overnighting) coordinates we're at now are to the leeward side of the landmass we're on and offer superb open views right next to a crashing sea. We spotted at least one common seal, one grey seal and sandwich terns are plentiful here.
We'd not been here long when a local couple out walking stopped to talk natural history for a while. They were very well informed and told us dolphins were common, and a great northern diver had made the bay its home. Unfortunately neither showed this evening but tomorrow's another day...
Sent from my mobile device
Posted on: Friday, August 13, 2021