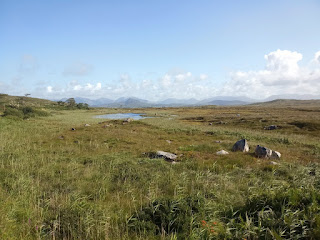 Blogging at 21:45 on Wednesday 11th August from N 53.46811°, W 10.08436° / http://maps.google.com/maps?q=loc:53.46811%2C-10.08436
First up today was a really steady drive around the southwest coastline of Connemara and it was just gob-smacking. The sea, coastline and inland vistas (pic) are all chocolate-box stuff.
It helped that the weather's been fine today, if a bit cool and breezy. The drive's feel-good was enhanced when Emma dropped into a random grocery store we were passing to get some fresh soda bread and came out with two warm scones that had literally just come out of the stores on-site-bakery oven.
We sat and ate them overlooking a perfectly proportioned bay complete with a privileged view of a family of red-breasted mergansers fishing as a coordinated team. Simple pleasures and all that.
By lunch we'd landed in the general area where we're currently hunkered down (coordinates) and we then spent the entire afternoon out on the bikes exploring. Absolutely none of the time spent out was disappointing, it's just beautiful out here.
Whilst out, we also - completely by accident - chanced upon two genuinely interesting cultural features. The first was a sprawling site of remnants of buildings that formed the old Marconi radio station built and operated here in the very early 1900s. The interpretation and information trails are top drawer and must have cost a fortune. The radio station complex itself was massive and apparently needed such power to operate that cracks from the sparks generated in the supply lines could be heard from considerable distances around. It was quite some creation, though, and was able to transmit signals all the way across the Atlantic to Nova Scotia.
Speaking of cross-Atlantic, the other thing we discovered was that the peat bogs around the radio station were the site of the crash landing of Alcock and Brown's first ever transatlantic flight in 1919. There's a cairn at the site and, about two miles away, a large memorial in the form of a plane's tail fin that points directly at the cairn. It's all nicely conceived and executed, and a fitting tribute. We couldn't quite process the courage that these two chaps demonstrated.
As enthused, the whole area is just stunning with only the proliferation of coastal salmon farms writ large to act as an ever-present reminder of our species' ongoing metaphorical nose-dive into the equally metaphorical peat.
Sent from my mobile device
Posted on: Thursday, August 12, 2021