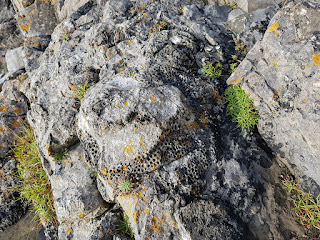 Blogging at 19:10 on Sunday 15th August from N 54.26114°, W 08.79262° / http://maps.google.com/maps?q=loc:54.26114%2C-08.79262
It was a pretty short drive today but we again took in some splendid scenery, this time courtesy of The Ox Mountains. Half way through the mountains, at Easky Lough, we decided to make the best of the landscape (and a break in the rain) to spin out on the bikes and explore a few of the side roads and tracks that led off the 'main' road through.
None of them went anywhere, well, they did, but nowhere in the conventional sense; they just petered out as all good homophones should, into peat. It ought to have been no surprise, really: as it was fairly obvious we were in peat-winning territory from the off. Piles of drying blocks and plastic bags festooning the landscape betray the practice. The scale also suggests cutting is still ongoing at a level well in excess of personal domestic use. Endangered biome, natural flood prevention system and important carbon sink versus commercially exploitable resource. A good GCSE English Language Spoken Language Project, perhaps, for some 15-year old or other. Oh, and in the process of a headlong rush to continue to 'grow' the thing they call 'the economy' in order to be popular amongst profligate over-consumers, it's something governments of the developed world should perhaps cock an ear to - both literally and as a paradigm.
Whatever 'value' we place upon them, the peaty uplands are ostensibly pretty barren places - if you discount the occasional half-sunken tractor, free-range livestock and questing ticks; I did put up a snipe, though. I'm not sure who was most shocked but I do know one of us was better equipped to survive there than the other.
A short drive from the Ox Mountains to tonight's overnighting spot (coordinates) saw us squeezing down more tight lanes festooned with beautifully orange montbretia and equally beautifully pink fuchsia. Neither of these plants are natives but they do now dominate many roadsides throughout the island, and really do sit aesthetically (at least) pleasingly amongst the native lush-green vegetation.
At the overnighting spot (we've been here before), we've spent a while watching fulmar skim a rough, open sea with utter impunity, and gannets doing their party-piece folded-wing diving at improbable speed into goodness knows what depths of the ocean. Humbling stuff: or at least it should be.
From here, Emma-the-adventurous went rock pooling for the second time on the trip whilst I supervised from the comfort of the truck... at an ever-increasing distance.
It's an experience that I find at once endearing and troublesome as she's often drawn into pretty tricky terrain close to crashing oceans whilst appearing disturbingly Bambi-esque in coordination.
Anyway, thankfully there was once again no need for an airlift this evening and she did come across some pretty impressive fossils (pic).
As an aside - and for the first time on the trip - we've been 'joined' from a distance of about 150m by two other motorhomes. They're far enough away that they don't impact, especially considering the background noise from the wind and crashing sea, but I do consider this a fail. I can't remember when we last 'shared' a spot.
Sent from my mobile device
Posted on: Sunday, August 15, 2021