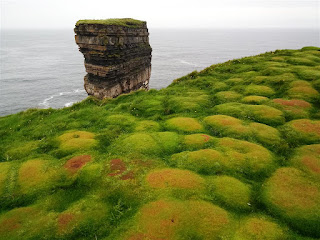 Blogging at 22:15 on Saturday 14th August from N 54.27757°, W 09.25593° / http://maps.google.com/maps?q=loc:54.27757%2C-09.25593
No corn crakes this morning but a very short drive to the western most point of the peninsula brought some excellent cetacean sightings.
We were basically just bumbling and seeing what we could see with the bins when we spotted a large school of what we think were probably common dolphins apparently hunting en masse about 750m off shore.
It was fascinating to watch them and Emma-the-normally-hyperactive was again utterly transfixed for a full hour; even to the point of brassing out being gnawed upon by swarms of tiny biting flies.
Normally, the prevalence of biting / stinging insects means that 'we' are very firmly instructed to proceed with a well rehearsed DEFCON-style response, the complexity of which depends upon the (perceived) severity of the attack.
Except when watching sea mammals.
This has happened before and it's probably worth passing on the potential benefits of cetacean-viewing-therapy to any medical professionals contemplating the prescription of Ritalin.
Next port of call was about an hour's drive from the peninsula to Downpatrick Head. It's a bit of a honey pot but is well worth a look with its genuinely impressive blow-holes, sea stack, ecosystems, WWII memorabilia and (as is common in Ireland) media in various forms that arguably somewhat ambitiously - and often apropos of not very much at all - reminds the faithful of a fairly random miracle or two and urges a nod towards a saint (or saints) of choice. It's all good thought-provoking stuff, even if some of the thoughts provoked sit rather uneasily.
Most impressive for me was the way the stressed flora has most definitely faithfully revealed the underlying basalt geology (pic). Ecological niches 101 / the work of a deity.
Just down the road is Lacken Bay. That's where we are now and where we're going to overnight (coordinates). It's a huge, flat expanse of intertidal sand, with a few very shallow mudflats thrown in where freshwater streams and springs drain into the bay. It's a fantastic place for gulls and waders with good numbers of dunlin, ringed plover and oystercatchers.
It's also apparently a place used for full-on thoroughbred horse racing, I'm not into such things but can imagine it's a sight.
Just for the record, it rained a lot again today and it's become quite a sport to try and dodge showers. We usually lose.
Sent from my mobile device
Posted on: Sunday, August 15, 2021