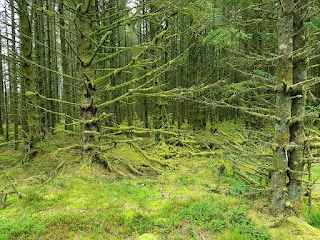 Blogging at 19:30 on Monday 16th August from N 54.86991°, W 08.16481° / http://maps.google.com/maps?q=loc:54.86991%2C-08.16481
First up we drove back into Northern Ireland for no other reason that I'd seen a forest drive on the map that looked interesting: and so it proved to be.
We found the (Lough Navar Forest) drive quite a formal affair, with the entire length of the drive being on freshly sealed surfaces complete with loads of good information panels and viewpoints. As well as the plantations we found lots of open heath areas, little loughs, and it was evident that the whole area is something of a temperate rain-forest; teeming as it is in ferns and bryophytes (pic).
The main viewpoint (overlooking Lower Lough Erne) is a bit of a honey pot, but it deserves to be as it is pretty impressive. Tucked away in the corner of the viewpoint parking area we found a couple of understated memorial stones and a few very small and wind-tattered New Zealand and Canadian Flags. These were all about commemorating airmen who'd been lost in crashed aircraft in the area during WWII. We liked how discreet the whole thing was and were humbled.
The formal route through the forest lent itself well to an un-trafficked and very scenic run, so we did just that and knocked off about 5K each.
Bird life was OK, too, with a great-spotted woodpecker, a huge flock of mistle thrushes (welcome to autumn), and a superb hunting-merlin sighting being the most notable.
After the forest experience we dropped back in to the Republic and had a grey, rainy, dirty, road-worky, and altogether pretty dismal drive back up to the area where I had my worst ever bike crash in 2017. The weather and road conditions seemed fitting, somehow. We were intending to overnight somewhere near to where I crashed but - as sometimes happens when bumbling - the road we set off down presented no obvious kipping opportunities, and we instead found ourselves being drawn further and further in, covering mile after mile of improbably narrow single-track with nowhere to turn, whilst all the time becoming more and more frustrated and fatigued. And, of course, the rain and wind conspired to heap on the draining-of-spirit by lashing in with ever increasing ferocity.
This is just one of those things that happens sometimes when travelling as we do and we've learned that rather than fight it and press on into oblivion (and the possibility of making errors), it's best to just take on the chin the simple fact that not every overnighting spot is going to meet with aspiration - and so we called it a draw at the first place we could physically fit the truck (coordinates), where we're currently being lashed by incessant rain to the point it's hard to even see out of the windows.
Again, sometimes it's just like this and if it's going to be a less-than-ideal camp and miserable weather, it might as well be a much-less-than-ideal camp and really miserable weather. We're just going to drink whiskey, turn up the heater and watch a DVD. I think we'll survive.
Sent from my mobile device
[EDIT] The mistle thrush sighting referred to above was only fleeting and I wasn't terribly happy with it as I also heard a few of the birds calling and they sounded like fieldfares. Fieldfares, however, are winter visitors and only generally start to appear in the UK in late October / early November, so I mentally glossed over the calls I'd heard - I was out running, after all. But, a further fleeting glimpse of a similar flock on day 22 of this trip confirmed fieldfares were indeed in the country already. Welcome to early winter!
Posted on: Tuesday, August 17, 2021