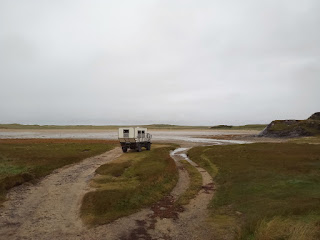 Blogging at 21:30 on Tuesday 17th August from N 55.14948°, W 08.12065° / http://maps.google.com/maps?q=loc:55.14948%2C-08.12065
As per yesterday's entry we simply hunkered down last night, sipped whiskey and watched Buffy once again defeat numerous demons with little more than (admittedly impressive) martial-arts skills whilst also humorously juggling teenage angst. We were in bed by 10:00 and asleep by 10:01.
But that wasn't how the day ended. At about 23:30 we were awoken by a car pulling up behind us; this we did not expect. After a little bit of coming-to and assessment of the situation we realised it was the police. It seems that parking to the side of a hardly-ever-used single-track lane in the God-forsaken uplands of Co Donegal is noteworthy enough for us to have been reported to the Garda.
It didn't take long to sort and the officers were impeccably polite and apologetic on account of disturbing us. The production of passports and the explanation that we were simply seeking out wildlife encounters appeased them completely and they departed with a hearty 'God bless'. We didn't mention Buffy or whiskey as that might just have unecessarily complicated things.
Today's been another grey, cold and rainy affair but we've (mainly) managed to dodge showers and have basically leapfrogged along several bays and sea-scapes of the north western coastline (pic). We've done well for sightings and have seen, amongst the 'usuals', both bar and black-tailed godwit, turnstones, sanderling, a common seal and several eider ducks.
One of the best sightings has been of half a dozen or so ravens performing acrobatics on difficult eddies and air-currents over some small sea cliffs close to where we're parked and are intending to kip (coordinates).
The birds have been tumbling, spinning, play-fighting and even dropping stuff from their beaks and feet, only to then dive acrobatically through the swirling eddies in an effort to recapture the released item. I have no clue if these displays were in any way 'significant' in raven socialisation or skill-building; or whether the birds were simply having fun. It very much appeared to be simply the latter.
In other news, it's probably no bad time to briefly mention that from day one we've had innumerable interactions with locals, some of them quirky, many of them utterly bemusing. The sweary-lady and nocturnal flautist are just two that I've already recounted but if I find time I'll elaborate on more. Suffice to say that in spite of geographical proximity and the sharing of an official national language our culture, norms and conventions are worlds apart.
Without exception, though - to this point at least - we've encountered nothing but a sense of welcoming, friendliness and disarming inquisitiveness. Albeit some of it being very, very quirky!
Sent from my mobile device
Posted on: Wednesday, August 18, 2021