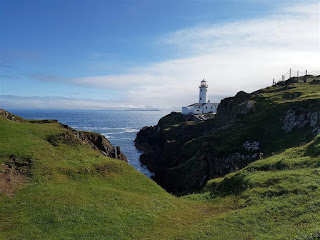 Blogging at 22:00 on Thursday 19th August from N 55.25650°, W 07.51430° / http://maps.google.com/maps?q=loc:55.25650%2C-07.51430
It's been a fine day! Although it mizzled throughout the night we awoke to lighter skies and it hasn't rained all day... yet.
We started the day with a really steady bumble along the northern end of the Fanad peninsula to the lighthouse (pic). The range of habitats in this area is fantastic and (broadly) includes coastal, dunes, machair, freshwater, hedgerows, rocky outcrops, unimproved rough grassland, improved pastures, and gardens. The houses around and about sit reasonably well in the landscapes and are mainly (as with the rest of the rural Republic) extremely well maintained and presented. Altogether the landscapes and habitats are diverse and very pretty. I think it's my very favourite part of the country.
After the bumble we drove South around the bottom end of Lough Swilly and called in at the Inch RSPB reserve. As usual, and although not yet into migration season, it was teeming with wildfowl, geese and waders. Most notables were black-tailed godwit and a solitary greenshank.
After the reserve we headed north as Emma is intent on 'doing' Malin Head, the northernmost point of Ireland. It was a pretty uneventful drive to where we are now (coordinates) and where we intend to overnight... apart from the last 10 miles or so. This 'last 10' was involved very narrow roads, an electricity wire dangling across the centre of one road at a height of about 3 metres (the truck is 3.5m high) and some of the steepest mountain roads we've ever done.
The mountain road involved driving over the Gap of Marmore. The sheer height of the gap is unremarkable but what sets it apart is that no one seems to have told the road construction team of the concept of chicanes. Essentially, the road basically goes straight up the mountain, tops out in 'The Gap', then gets reeeealy hairy with a super-steep, narrow and twisty descent (the chicanes memo had seemingly been delivered by this point).
We needed third gear in the low-ratio box to go both up and down, which might not sound bad, but this kind of gearing with our weight and modest power tweaks is usually only needed in tricky / steep off-road scenarios. There are no signs indicating gradient (these don't really feature in the country at all), but my best guess would be a pretty consistent 1:3. We were glad to be off the hill.
It's again incredibly pretty where we are with the Atlantic to one side and mountains-of-terror to the other. They look benign from here and even approaching startling in full-heather bloom in the evening light.
Though the natural beauty remains, it 'feels' different to other spots we've stayed. Tourism especially seems to be more of a thing. Even with C-19 and the Republic's far more restrictive and cautious approach it feels like this is very much Gringo territory.
A quick spin out on the bikes confirmed that feeling with sightings of many a tourist trap, diversity of car reg numbers, numbers of car drivers dawdling about looking somewhere between un-purposeful and vaguely bewildered, and a cheery greeting of ¡Hola! from some young girls playing in the garden of a rental cottage.
Sent from my mobile device
Posted on: Friday, August 20, 2021