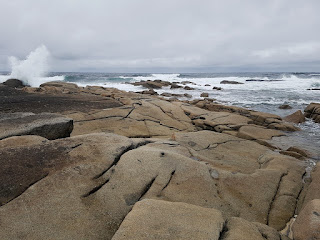 Blogging at 21:30 on Wednesday 18th August from N 55.25567°, W 07.75408° / http://maps.google.com/maps?q=loc:55.25567%2C-07.75408
Today's had a bit of theme. Emma-the-nostalgic came over to Ireland a good while ago (on two separate occasions) to race in a legendary half-marathon known then as the Mooathon. She's often spoken of its severity and stunning views.
She craved the nostalgia and I was curious as to just how hard it really had been, so we went to see how well memory had served. Well, suffice to say that if you need to engage the low-ratio box in a T244 weighing in at 7.5 tonnes to negotiate a road-based half-marathon course then that's one tough half-marathon course. Unfortunately the stunning views component remained elusive as the cold, grey and misty rain of the clouds we were permanent engulfed by meant visibility was down to about 50 metres.
Part two of the nostalgathon was to revisit the Fanad peninsula. We were here in 2017 but Emma was so Ill she spent most of the time we were in the area delerious, shivering and lying under about six blankets in the back of the truck. On the upside, it had been one of my very favourite parts of the Republic and I'd positively enjoyed it.
It only seemed right, then, to go back to fill in the gaps; so here we are at Ballyhoorisky Point (coordinates). The seascapes and machair in this area are fantastic and we've spent a lazy (if grey) afternoon looking out to sea (pic). We've also  fitted in the odd shower-dodging short walk / run.
From our seascape / intended overnighting spot we've drawn a blank with cetaceans but have had some excellent bird sightings. Of the more notables, we've seen six Arctic skuas, one great skua, and a merlin pursuing a meadow pipit at full speed in open skies. The chase continued beyond our line of sight so the conclusion remained unknown - and I'm kind of glad it did.
One other extraordinary sighting was of a gannet doing its full-on, wings-folded-dive thing into the ocean. This occasion was marked out because the bird dived into a swell of water about twelve feet tall, just before the wave broke. Because of the angle of the bird's dive, plus the particular split-second combination of  wave progression and light, the bird remained in full view whilst submerged, continuing it's plummet underwater for the full twelve feet of the 'vertical' water stack... and then beyond into the unknown. It was both a surreal and wonderous sight.
Altogether another excellent spot and just for the record it also supported a pretty unusual flora, including splendid patches of bog asphodel.
Sent from my mobile device
Posted on: Thursday, August 19, 2021