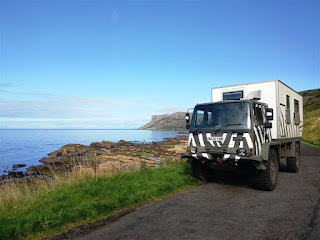 Blogging at 21:30 on Sunday 22nd August from N 55.21082°, W 06.19374° / http://maps.google.com/maps?q=loc:55.21082%2C-06.19374
First up we were met with more murk, drizzle and general grey; but this was a good thing. It was a good thing because these conditions, combined with an early start, meant we had The Dark Hedges to ourselves: this is apparently something of a rarity in recent years.
The Dark Hedges are truly impressive  gnarled and mangled veteran beech trees that run each side of a now-closed-to-traffic road for a distance of a good few hundred metres. They are, or more fittingly were, an attraction of natural wonder. Beeches often grow in stands so compete for light and as a result grow pretty straight and tall but these, forming as they do a 'hedgerow' have, over the centuries, spread, perhaps been pollarded, and altogether have rather refused to confirm to normal beech standards.
Unfortunately, they're now also international celebrities, forming as they do a famous mystical path trodden in several episodes of The Game of Thrones.
Their latter-found fame has notoriously brought international visitors in their tens of thousands; hence the now-closed road; plus a not-so-subtle shift in their formerly dignified natural-wonder status to mere aesthetically appropriate backdrop to a collection of real randoms pretending to be some fictional randoms brutally slaying each other over pretty random things. As saplings, I imagine this was a fate none of the beeches predicted. It's hard to tell whether they mind or not.
Onwards through the drizzle we headed up to Ballycastle to suss out parking and other logistics for tomorrow, when we're booked to go over to Rathlin Island. In essence, said sussing done, we've then hung about in the general area enjoying the vistas and watching wildlife. Even the sun came out this afternoon and allowed use of the cab-top seat (pic).
There's been a lot to see and amongst it we've had some very close-up common dolphin sightings as well as a couple of seals and an Atlantic skua. The landward side of where we're currently hunkered has also been productive. We spotted a couple of buzzards bickering over a seized rabbit and - completely unexpectedly - had a really excellent and prolonged sighting of two beautifully marked fallow deer.
There was human interest, too. In the pic it's possible to view the towering columns of the headland. These are seriously high cliffs and - palm-sweatingly - we could see numerous climbers making the full ascent of various routes all afternoon. I'm personally rubbish with heights when exposed like that and found it a hard watch. On the other hand, Emma's climbed quite seriously so had a much more informed understanding of the unfathomable lunacy.
As an aside, it's probably not visible in the low-res pic, but beyond the headland the Mull of Kintyre is sitting quite nonchalantly in the afternoon haze, whilst a little to the left of shot the island of Islay is also easily visible. About four years ago we were at the Kintyre lighthouse looking over at where we are now, wondering what it might be like to be where we are now looking at Scotland.
Turns out it's pretty much as imagined.
Sent from my mobile device
Posted on: Monday, August 23, 2021