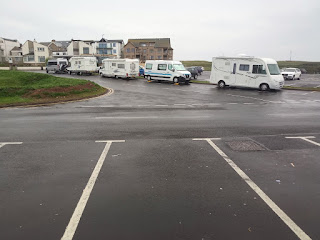 Blogging at 22:00 on Saturday 21st August from N 55.11512°, W 06.51234° / http://maps.google.com/maps?q=loc:55.11512%2C-06.51234
Parkrun firmly in mind, we made it to Portrush with enough time to spare to try to park what we freely accept is too-big-a-lorry in the unfamiliar-to-us environment of a very popular and busy seaside town. Fair to day this kind of caper has us out of our comfort zones. Surprisingly, though, we discovered we were far from pioneers.
Scattered around the town we saw several rows of conventional motorcaravans (many longer than the truck) lining a good number of on-street parking bays, nose-to-tail, most with (ubiquitous) silver-screens drawn, and most apparently hunkered down for the long-stay on tell-tale levelling blocks; although one panel van conversion did up the stakes rather and had a spiffy self-leveling hydraulic system deployed! One can only imagine such an automated leveling device greatly enhances the experience of sleeping on the side of a heavily trafficked and rather drab street adjoining a large and permanently-busy car park whilst surrounded by all the trappings of a Victorian seaside town.
Anyway, in spite of the intense and surprising competition, we did manage to find a rare break in double-yellow lines next to a row of dilapidated buildings and a fast-food stall, and seriously considered broadening our horizons by staying there for a couple of days.
Regular readers may just have detected unedifying tones of sarcasm. For the benefit of irregular readers, we didn't really consider staying.
Of course, it's absolutely up to people how they choose to recreate / use their motorcaravans and the town-scapers we discovered very probably think we're nuts for staying in the places we do. That concession made, I don't imagine a scene like the one in the pic will make it past most marketing directors and appear in any of the 2022 promotional literature currently being planned by established motorhome manufacturers.
To the parkrun. As claimed, the whole 5 kilometers is out and back on the town's splendid sandy beach. I can honestly say it's the first pure running event we've raced in where the organisers have to bring jellyfish to competitors' attention as part of fulfilling their duty of care requirements. And there were some.
In short, it's a fantastic event. Underfoot conditions today were good as the tide was receding and it left 5k of smooth and pretty hard-packed sand to race on. Only the occasional run-off stream, bed of kelp and stranded jellyfish conspired to slow things down. About 250 runners took part and although it was as physically tough as expected, it was also a blast. Great stuff.
Following the run we made our sand-mottled way out of town - resisting the draw of the amusement arcades, tattoo parlours and a giant Ferris wheel - to instead do some sea-watching along the north coast. Conditions were excellent with flat, grey light and a flat, silver-grey sea; making any birds out on the water or cetations etc breaking the surface really easy to see.
We had several excellent sightings of common dolphins and harbour porpoises at two separate locations; and even more sightings of boats full of tourists chasing such sightings. It was the perfect come-down to the frenetic parkrun start to the day and - as a bonus - kept Emma from getting lost and / or out of general mischief for several hours.
Part of the journey to view seascapes saw us pass the entrance to the Giant's Causeway. It was absolutely teeming with aspiring visitors, many of whom were spending a great deal of time performing U-turns on the only road serving the attraction in an effort to find a musical-chairs style parking spot. It looked just awful.
Having satisfied ourselves that overnighting anywhere in the vicinity of the major north coast attractions was a battle not worth having, we retreated inland to the coordinates shown where we're hoping to kip. There's not much moving here but we have heard a strange and persistent plaintive call from what sounded like a young bird of prey and also about an hour's worth of distant drumming, which according to Emma-the-Googler, seems almost certain to have been part of a nearby Orange Order parade. One of these distant noises left us feeling more uncomfortable than the other.