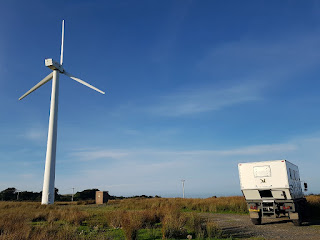 Blogging at 22:10 on Tuesday 24th August from N 54.85411°, W 05.89612° / http://maps.google.com/maps?q=loc:54.85411%2C-05.89612
After arriving back from Rathlin yesterday evening we did little more than dodge the misty-fog monster and shuffle a couple of kilometres around the coast to find an overnighting spot.
Although the mist was well and truly in, I did still have a wander out with the bins and spotted a solitary immature grey plover, plus a good roost of kittiwakes. The plover looked like it was fresh in from its migration from the Arctic tundras but was foraging and feeding well.
This morning saw a huge shift in the weather with clear blue skies and - before about 7.00am anyway - not even the slightest of breezes. With the sun still quite low, this rendered sea viewing just about mirror perfect; so view the sea (again) we did. The sheer numbers of dolphins and porpoises visible in the straits between the mainland and Rathlin Island was just amazing. At any given time it was possible to view as many as half a dozen pods of numerous animals going about their daily duty of terrorising fish.
But the best was to follow. Apparently utterly serenely, but heading quite purposefully in a straight line towards the Kintyre peninsula, nothing less than a minke whale appeared. We watched it rise to blow and then resubmerge about eight times over the course of about half a mile of its commute. It was almost surreal and truly the stuff of slack-jawed wonderment.
Humbled by our good fortune we pretty much decided that'd be a tough act to follow so we quit whilst ahead and started to bumble in the general direction of Larne. This is because tomorrow we have to return to Scotland, and not long thereafter the realities of life no longer on-the-road.
Fate accepted, but far from just trunk-roading to the port, we had a couple of cards still to play. The first of these was to engage the low box and head up into the mountains of Antrim. Totally worth it. In the late-summer sun they were more than a little impressive and gave up some excellent feel-goods. During the traverse we also saw a flock of what seemed for all the world to be fieldfares. If they indeed were, and not mistle thrushes, then that'd be an extraordinarily early sighting of these winter visitors. More research required.
The second card was to visit a fellow truck-builder whose philosophies and projects I've been intrigued by for a few years now. Suffice to say it was a most enjoyable way to spend an afternoon. The company was both engaging and compelling, and the current truck-project utterly superior to anything I've personally ever seen at the self-build level. It's truly impressive and, once finished, I'm confident will be right up there with the best of the best... and considerably better than just about anything available on a commercial basis; at any price.
Full of splendid afternoon tea and a head full of inspiration to build a truck properly, we continued on bumble-appropriate roads towards Larne with half an eye out for an easy overnighting spot.
The strategy for this spot-spotting caper more often than not involves looking at maps / mapping software and picking out / aiming for tell-tale features. Today was not much different except the feature aimed for turned out to be on private land. We were just about to call it a fail when the farmer-owner of said private land happened to magic out of nowhere on a Polaris. Suffice to say that in no time at all, the overwhelming friendliness and hospitality of the people of Ireland once again came to the fore and on said private land we're now hunkered for the evening (pic - and there's a bonus prize if you can guess the feature aimed for).
For so many reasons it's going to be hard to leave the island of Ireland.
Sent from my mobile device
[EDIT] Conformation that, though rare, it's not unknown for small small numbers of fieldfares to hit NI from mid-August onwards
Posted on: Wednesday, August 25, 2021