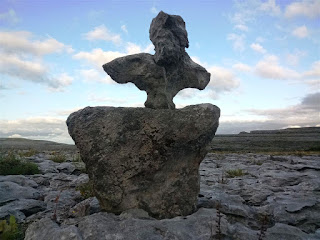 Blogging at 22:30 on Sunday 8th August from N 53.07641°, W 08.99879° / http://maps.google.com/maps?q=loc:53.07641%2C-08.99879
OK, here's the truth: yesterday's belief-system encounter saw us reflecting and chatting for a good bit of this morning's (naturally) rainy drive and put us in contemplative mood. There was no conclusion but we're more than prepared to accept that it's unlikely humanity, the planet, and everything associated with both would be in a worse position were our species to adopt a leaf or two from the Bhagavat.
The drive itself saw us fairly quickly into the Republic and the difference was (as per our previous travels) immediately palpable. From road signage, through patriotic symbolism, language and architectural vernacular; to the simple visual of absolutely everyone still dutifully wearing face masks: no non-existent hard border required.
By mid afternoon we arrived at the coordinates shown, just beneath Slieve Carran in the Burren. Last time we were in this area we didn't have a great deal of time to properly enjoy the amazing limestone landscapes (pic) and pledged to return; so here we are and it's been great... but also very weird.
The great... Awesome landscapes with some late-afternoon and evening sunshine and rainbows (hooray), sightings of feral goats and a peregrine high on Slieve Carran, good, extended sightings of a fox pounce-hunting, plus a short-eared owl quartering in the encroaching dusk.
The weird... At about 10pm we were just nicely in bed and heard a car approaching. There hadn't been any cars by for hours so we defaulted to alert-mode. Anyway, not only did the car slow down ominously, but pulled up right next to the truck complete with the twin delights of radio playing and engine left running, great.
Now, this kind of stuff does happen from time to time - overnighting as we do - and I confess our immediate reaction is selfish irritation and risk assessment. So, for five minutes or so we lay silently, selfishly irritated and assessing risk.
The oddest escalation then unexpectedly happened and swiftly disabused us of such triflings. The car driver stopped the engine, turned off the radio and stepped out of the car in the now near darkness. He was a large chap in his 70s and was armed.
With a flute.
For the next 15 minutes or so he played the thing quite beautifully and any notion of irritation was replaced by attempts to make some sense of this truly surreal encounter / stifle hysteria. Anyway, after he paused for an interlude Emma spontaneously dropped one of the window shutters and applauded; as seemed appropriate. I was still a bit back-footed and wondered if the ice-cream seller might appear before Act 2.
The elderly gent and Emma then had lengthy conversation and we learned that the musician / hill farmer historically played alongside a now-deceased blind harpist who died at the age of 100, and whose ashes were scattered on the Burren a couple of hundred metres away. He'd stopped to make the tribute on his rounds checking his cattle stock.
The layers of improbable just kept on stacking.
He apologised in case he had disturbed us but explained he wasn't sure if the truck was occupied or not. Before leaving he asked if he could play another tune for us, did so, wished us good fortune and then disappeared into the night.
I lay awake for a long time wondering if Leprechauns were in fact real, after all.
Sent from my mobile device
Posted on: Monday, August 09, 2021