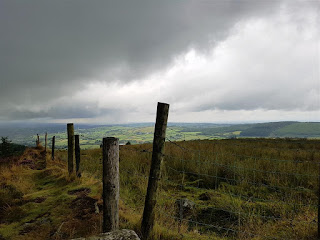 Blogging at 21:30 on Saturday 7th August from N 54.19138°, W 07.48976° / http://maps.google.com/maps?q=loc:54.19138%2C-07.48976
Last-night's finger-crossing worked and we enjoyed a solitary night in the car park with only the crashing waterfall and equally crashing rain for company.
Rostrevor parkrun was, as expected, a rude awakening; not least because it's basically either up, or down - they don't do flat in Rostrevor. It was a genuine pleasure to get back into it, though and kudos to all that have made, and continue to make the parkrun phenomenon such a massive success on so many levels.
More splooshing followed with a sort of westerly-type bumble that took in a superb viewpoint stop at the top of Carrigatuke, where we lunched in a mixture of cloud and torrential rain; but also enjoyed the very occasional lifting of cloud to reveal a truly awesome 360 degree panorama; about 20 degrees of which is shown in the pic.
Not having any idea where to head thereafter I had a quick look on OSM  software and saw an intriguing island in Upper Lough Erne that showed a solitary building labelled 'Hare Krishna Temple'. That seemed like challenge enough.
An hour or so later we found ourselves following some home-made wooden signs for the 'Hare Krishna Landing', and in doing so squeezing down a gravel track past some distinctly atypical Gaelic sybolism. Fair to say we held a sense of mild trepidation as well as the very common concern that this might well be an almost impossible reverse...
We needn't have worried, though. At track's end we came upon a sizeable clearing, a jetty, parked cars and open views over the lough. Moreover, we also saw a very welcoming sign inviting all and everyone to take a boat over the lough to 'Krishna Island' for an introduction to the belief-system and a free lunch!
Not long after arrival a youngish couple arrived in a battered old van and whilst the female party made a mobile call the male started extremely competently playing what was very probably belief-system-commensurate music on what appeared to be an elaborate belief-system-specific woodwind instrument.
Shortly after this, a pretty tired looking RoRo ferry big enough for about three cars pootled over from 'the island' to our landing and disgorged about a dozen people, all of whom looked slightly haunted. Without much ado they clambered into the various cars and drove off.
This was all very strange, but got stranger; because at this point we were approached by a very polite, softly-spoken chap in his 40s attired in flowing (perhaps belief-system) clothing, who earnestly invited us to visit the island tomorrow to witness a wedding, have a free lunch, and enjoy some traditional Hare Krishna music, chanting and yoga.
I have to say he really did come across as entirely at peace and was almost spellbinding. We thanked him equally earnestly, told him we may, and later decided that at some point future we might well indeed.
He, a scruffy looking waif that appeared from who knows where, and the ropey RoRo boat then returned to the island complete with a couple of newly embarked cars.
One of my mantras is that when you do stuff, you see stuff, and stuff happens. Sure enough and once again, we did, we did, and it did.
Sent from my mobile device
Posted on: Sunday, August 08, 2021