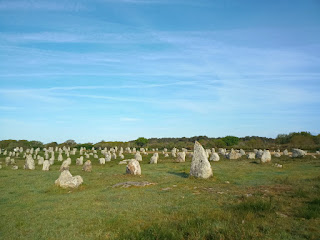 Blogging at 19:30 on Monday 18th April from intended overnighting spot N 47.89972°, W 04.33861° / http://maps.google.com/maps?q=loc:47.89972%2C-04.33861
In order to have as dignified an experience as possible, we hit the more formalised and celebrated areas of the Morbihan Megalithic Sites (pic) whilst the grass was still wet with dew. Even then, though, it was already pretty wretched in terms of visitor numbers and the proliferation of tat all too often associated with such affairs.
I don't imagine those ancient souls who toiled to create the genuinely impressive stone alignments envisioned the climax of their labours to be hoards of lollygaggers dangling smart phones out of a gaily-painted, road-going wooden train farcically encircling their sacred offerings.
We managed to resist the temptation of the gaily-painted wooden train and instead scuttled round the site (on foot) with all haste. We just about got round as the car parks started to brim.
As a bonus, whilst (briskly) marvelling at the stones, we also saw a goshawk, and then heard the distinctive call of a hoopoe nestled secretively in a woodland nearby. That one was an enjoyable one as we'd earlier lamented we were perhaps too far north to encounter hoopoe this trip. Huzzar for global warming.
After liberating the truck from the ever-filling car parks we significantly contributed to the northern expansion of hoopoe by doing some boring busy-road driving out to the west of Brittany: where we now find ourselves at the coordinates shown.
The spot is right on a road but offers excellent views over wetland habitats and has thrown up a splendid grasshopper warbler sighting. These fellows are more often heard than seen and we count ourselves lucky that we actually watched this one sing on several different occasions.
As part of deciding where to stop tonight, I've had a spin out on the bike in a combined training / exploring / recce-ing kind of ride. Bottom line: this area is one of the toughest I've ever encountered in France to find a decent overnighting spot. The landscapes are mainly mainstream agricultural and there's a distinct lack of both the one-lorry-sized scraggy bits of byway / pristinely managed communal areas that are normally reasonably easily found over here.
Much of the architecture is not 'typically' French, either. The rendered dwellings around and about are quite spaced out and quite sterile-looking. The whole area feels more like parts of rural Germany than France. To be honest the whole area is devoid of much quaintness and it all feels a bit bland.
Sent from my mobile device
Posted on: Tuesday, April 19, 2022