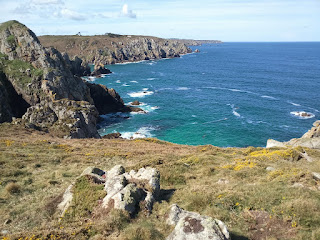 Blogging at 22:00 on Tuesday 19th April from intended overnighting spot N 48.40918°, W 03.69542° / http://maps.google.com/maps?q=loc:48.40918%2C-03.69542
The west of Brittany redeemed itself to some extent this morning. We headed to a random dead end at one of the most westerly points (N 48.06015°, W 04.67136°) and exploring from here we found we were literally spoiled for choice regarding both terrific nature watching spots and equally terrific overnighting opportunities.
We spent hours pootling about at various locations in the general area both on foot and in the truck. The area is festooned with coastal paths atop a pleasingly rugged coastline. It's all very fetching.
Emma made the most of the sea-view paths and went for a run, whilst I made the most of a far less strenuous opportunity and went birding. It was a win-win. She enjoyed the purgatory whilst I laid eyes on my first cuckoo of the year (after all their elusiveness) and I also spotted four choughs. These were a real bonus: I haven't seen any for years.
By mid-afternoon we were heading east again as we're going to have to be back in Cherbourg in a few days and really don't want to have to put in any boring autoroute days.
By late afternoon we were ready to camp but, irritatingly, we again struggled to find a decent spot and had our fair share of tricky reverses before eventually ending up where we are now. It's a very quiet spot and though there are none of our ordinarily preferred commanding views, the air is literally exploding with woodland-bird song. It's arguably no bad thing to occasionally see with one's ears.
Even after we found the spot we had to work at it a bit and really could have done with a mini-excavator on board to level up the ground. Again, all part of the fun.
On the point of levelling up the truck, Emma and I are almost on the same page. I simply prefer it but Emma is incredibly sensitive to any sloping, especially come sleep time. If her shoulders are not level with, or at the very least no more than 13.65mm above her feet, then apparently her blood refuses to circulate property and would, I am assured, lead to premature mortality and / or cold feet.
Cunningly, when I built the truck I made the rear bed full width and totally symmetrical, so a quick flip of the sleeping bag is often all that's needed to assure we're within tolerances.*
Sent from my mobile device
* We used to employ the Malteser test to determine levelness. We'd simply unleash one of the delicious little chaps on the floor and if it rolled away at more than a very gentle pace then we knew we had work to do. This method was dropped some years ago as we found that in very hot weather the test was far less reliable unless the confectionery was stored at a temperature no greater than 5 degrees C under the melting point of its chocolatey skin. We did think of installing a special fridge to maintain optimum viscosity, but it was all getting a bit complicated so we now use a little bubble gauge that serendipitously came into our lives via the gift of a Christmas cracker.
Posted on: Wednesday, April 20, 2022