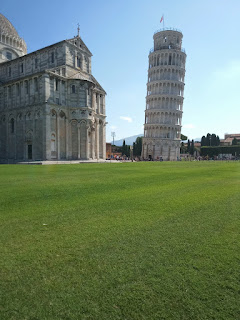 Blogging at 22:00 on Friday 29th July from intended overnighting spot N 43.85147°, E 10.44754° / http://maps.google.com/maps?q=loc:43.85147%2C10.44754
We didn't get to disembark from the ferry until 1.30am this morning and it's fair to say that our arrival on Italian soil saw us pretty pooped. Fortunately, the port of Livorno has an area set aside for people in camping cars to spend the night in cases such as these; so we gratefully joined a loose community of people in a similar position to us and then - like everyone else who found themselves in this position - spent the next half an hour trying to cool off the interior of the truck in order to be able to sleep. Because of the stuffiness of the ships hold, the interior thermometer read over 35 deg C when we first pulled up. It seems most of our new neighbours were in a similar pickle and it was actually quite surreal - at 2.00am - to witness people flanneling themselves down, drinking copiously and wandering around zombie-like in a silent yet respectful mutually-wilting suffering.
In spite of the continued heat we slept well and were only awoken by the arrival of a huge ship - well after our normal getting-up time. To our surprise, ever other camper had already left and, disturbingly, we never heard any of it. Daylight revealed that the area we'd kipped in - though a handy refuge in the circumstances - was disappointingly grubby, litter strewn and most definitely urine-soaked. The morning sun gave this component a particularly distinctive nose. Super!
We left pretty quickly after coming to and - gingerly getting an eye in with the Italian traffic - headed for the infamous Leaning Tower of Pisa. En route we took on our first Italian fuel and paid €1.85/l. Cheaper than France and about £1.54 in GBP. On the unmanned card-only forecourt we saw a drug deal go down. Double-super!
The Leaning Tower of Pisa. Well, in summary, it is quite a marvel and is well worth a look. The entire Pisa Cathedral complex is all pretty impressive with some serious architecture comprising some seriously opulent materials. It would be easy to walk around the site and completely overlook less obvious things like the quality of marble that forms the very ground that the throngs of tourists present were walking upon, whilst generally gazing upwards and / or posing for all manner of contrived pictures with The Tower as a backdrop.
The favourite contrived pose seemed to involve the subject standing bolt upright, or holding some-or-other limb or appendage as perpendicular to the earth's surface as possible in order to irrebuttably prove - usually via a smartphone snap or two - that The Tower does indeed lean (it does).
Unsurprisingly, the countless thousands of tourists milling around (either randomly, or via the incessant corralling of a guide) were more than well catered for in the tat-stakes. Dozens of stalls and street-sellers surrounded the place and every imaginable vaguely Pisa / Italy-related item of chintz was available at a truly unreasonable price. I confess, it was difficult to resist buying an incredibly poor facsimile of 'The Tower' in order to torment some unsuspecting relative.
Further tainting the general atmosphere of World-Heritage-Site compromise brought about by the protagonists of spontaneous and instantly-regrettable purchases was the omnipresent smell of broken sewerage pipes: something at which Italy more generally seems to excel.
After quitting the scene with mixed feelings of being genuinely impressed and somewhat jaded we headed for some promising looking map features in order to have a relaxed afternoon drinking tea and random gazing around.
The map features proved more than suitable and, as a massive bonus, close by was a spring of potable water. This - according to a nearby information panel - had been created by none other than God himself and had subsequently been developed into the fauceted feature now seen on the ground by His loyal and grateful subjects. The resource proved popular and served a steady stream of locals, who turned up with huge assemblages of all manner of containers to fill up. During a gap in the local traffic we did the same and replenished our tank to max capacity with this gift from The Lord (not forgetting His loyal and grateful subjects).
After a lazy afternoon, during which I spotted another squacco heron and a couple of swallowtail butterflies, we headed for the walled city of Lucca to check out the parking situation for tomorrow's parkrun. The seemingly short and easy drive proved anything but as we got snagged a few times on a precipitous and tiny switchback-infested mountain road with lots of (very) substantial overhanging vegetation. We made it but I now need to spend a couple of hours with T-Cut polishing scratches out of the acrylic boat hatch...
Lucca itself is a busy place and it looks like parking for the hour or so we need tomorrow is going to present some logistical challenges. The walled city does seem to have its charms, though.
Tonight's intended overnighting spot is very urban and pretty ordinary: it's all about access to the run. It's next to a derelict building at the end of a dead-end road that serves only the derelict building. It's sort of OK but far from ideal noise-wise, and neither does it give up much in the way of vistas or wildlife. That said, there have been a few interesting sights, not least a couple of sloughed snake skins that Emma found in a nearby cemetery. On the slightly disconcerting side, just as we were retiring to bed a couple of cars turned up and another illicit deal seemed to go down. It was all done reasonably quickly, virtually silently, and the players didn't seem to care much about a huge zebra-striped truck bearing witness. Hmmm...
Sent from my mobile device
Posted on: Saturday, July 30, 2022