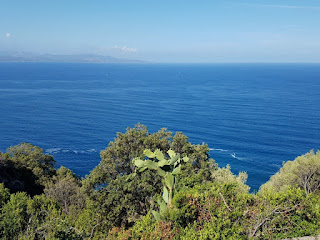 Blogging at 21:30 on Thursday 28th July from N 42.81375°, E 09.70165° / http://maps.google.com/maps?q=loc:42.81375%2C09.70165
We made it to port by 18:24 in time for the 18:30 cutoff and were quite literally squeezed on to the boat. Not one more vehicle would have fitted.
It was a shame to have been deprived of our last night on Corsica because we'd rather taken to it. Nothing we saw today altered our impression of vast areas of untrammeled wilderness and stunning natural beauty.
Anyway, back to the chronology before we were so rudely interrupted.
We woke this morning to some fresh mammal tracks on the dust near the truck; best guess was pine marten.
After leaving camp we headed up the west side of the island's northernmost peninsula and what a gob-smackingly gorgeous place it is. The coastline and mountains are extremely rugged, the sea brilliantly azure and the tiny villages extremely twee. Even the vegetation gets a look in with all manner of showy oddities, including what appear to be either native or naturalised cactus (pic).
In terms of the residents, we picked up on a sense of everyone here being pretty laid back and unhurried. In spite of us needing quite a lot of space on the very tight and winding roads, no one seemed particularly put out. If a bit of a wait or a reverse was necessary, then that's just what happened. A friendly wave and toot following extrication from whatever situation had presented itself was pretty much standard fare.
The roads today definitely needed full concentration, mainly due to overhanging rock faces and some bad parking in tiny villages but in the scheme of things they weren't so bad. It's true they made for very slow progress, but we've certainly done trickier ones.
During the drive we saw some pretty interesting vehicles, including quite a lot of French-registered pick-up based overlanders, plus one Austrian registered full-on overlanding truck.
The afternoon saw us out for a spin on the bikes on some of the (genuinely) back roads, where larger vehicles were often prohibited and - in spite of it being much like cycling through a furnace - we had a splendid (if hilly) time.
So, though it's been a brief encounter, the Corsican excursion has been very much worthwhile and is the stuff memories are made of. It doesn't feel much like France at all and it seems from quite a lot of posters, street art and other random iconography that at least a good chunk of the population doesn't regard itself as terribly French, either.
A cracking place and well worth a visit, even if just for the landscapes alone.
Sent from my mobile device
Posted on: Friday, July 29, 2022