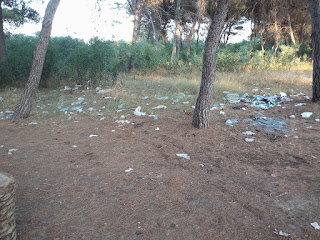 Blogging at 22:15 on Tuesday 2nd August from intended overnighting spot N 41.597237°, E 15.895212° / http://maps.google.com/maps?q=loc:41.597237%2C15.895212
Credit where it's due, the incessant barking actually thankfully cessanted not long after we retired to bed last night and from then on it was a pretty peaceful night. It was so good to be able to listen to cicadas and stridulating grasshoppers rather than the hideous human-based cacophonies of the past few nights.
The relative cool of the early morning also threw up more wildlife sightings over the meadows I mentioned yesterday including stonechat and (I think) a lesser grey shrike (it was a long way off and I couldn't be sure). We also heard a barking fox and Emma-the-vigilant managed to track and spot it in some nearby scrub. The meadows themselves proved to be excellent wildflower habitat and supported lime-loving flora rarely seen (or absent) in England including small scabious, forking larkspur, hawkweed ox-tongue and Mediterranean sea holly.
Once moving, we also spotted (unfortunately as roadkill) a crested porcupine. Neither of us have seen one of these before, alive or dead.
Today's drive was another hot one, which just got hotter and hotter as the day progressed. The increase was exacerbated by the fact we left behind the altitude of the Appenine mountains and dropped towards the east coast. As we progressed east the landscape flattened completely and to describe it as arid would simply fail to do it justice. The general appearance is one of a dust bowl interspersed with the occasional dessicated olive grove and huge numbers of derelict buildings.
The roadside rubbish in this area is a scandal. It's right up there with Romania and Montenegro. Unfortunately the theme also seemingly continues unchecked around most communal areas, including the beaches and beach car parks.
Close to where we are is a formally managed  beach area complete with hired loungers / umbrellas, a sanitised swimming area, and cafes. A bit further afield there are marinas crammed with expensive boats and surrounded by granite and marble walkways.
Between the two is a section of 'public' beach and there are people quite happily promenading and sunbathing there. They are doing so seemingly totally unperturbed by the fact that they happen to be amongst pile after pile of other people's rubbish. This is not stuff washed up from the sea, it's discarded food wrappings, plastic bottles, broken deck-chairs, drinks tins, the remains of umbrellas, shitty nappies. cigarette boxes, empty beer crates, plastic bags, discarded shoes and clothes: you name it... and there's literally tons of it.
This truly is a shit hole.
Tonight's intended overnighting spot is also right at the side of the sea and in the shade of some pines. It would be a super spot but for the litter here, too (pic). Unfortunately shade and sea-breeze are both absolutely vital and incredibly hard won: so we too live, for tonight, amongst other people's discarded crap. There is no respite. Unless you pay to be on a bit of managed beach, you are invariably surrounded by several years-worth of landfill. Emma managed a bike ride from our overnighting spot but before she left I kicked three shitty nappies off the track she'd be using in an effort to obviate any bike-splatter trauma.
It's such a shame as the spot has proved good for squacco heron, yellow-legged gulls, Mediterranean gulls, sea terns (Sandwich terns, maybe) and common sandpiper, as well as a few other more expected species.
It's also been a good spot for general sea watching and I've seen some massive fish, fully breaching and flashing iridescent silver. They looked very much like marlin and a quick look on the internet reveals that Mediterranean spearfish (same family) is not uncommon around Italy's coastline. Whatever they were, they're almost certainly permanently dodging sea-borne plastic and associated crap.
Shitaly.
Sent from my mobile device
Posted on: Wednesday, August 03, 2022